Sydney FC are through to the Westfield W-League 2016 Grand Final following a thrilling 1-0 victory over Canberra United at McKellar Park on Sunday.

Sydney FC are through to the Westfield W-League 2016 Grand Final following a thrilling 1-0 victory over Canberra United at McKellar Park on Sunday.

Jasmyne Spencer struck just beyond the hour mark for the solitary goal of the match, as a stoic defensive display from the Sky Blues kept Canberra at bay to seal Sydney FC’s fourth Westfield W-League Grand Final berth.

Sydney FC will face the winners of the other semi-final played between Melbourne City and Brisbane Roar on Monday with details for the 2016 showpiece event to be confirmed following the match. 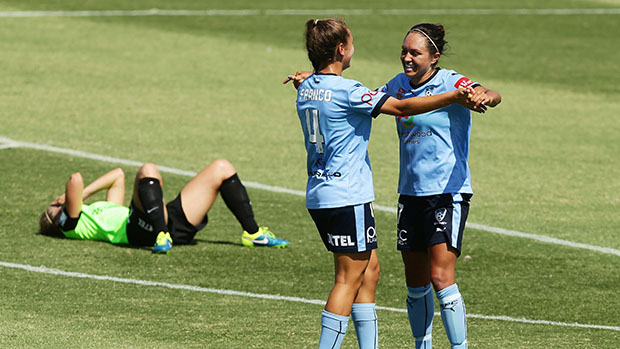 Head Coach Dan Barrett: “I thought it was a fantastic game, I thought both teams had opportunities to win the game and I’m just very grateful to be on the winning side today. Canberra gave us a great fight, we knew it would be that way, but we’re just happy to make the Grand Final. There seems to be a lot of talk about the goal, when you’re on the sideline things happen very quickly and I didn’t see it but you’ve still got to put them away and I’m grateful Jasmyne did.”

Teresa Polias: “It’s extra special to win here, we haven’t had much luck here in the last couple of seasons. We’ve just worked really hard this season and it’s nice that things have come together in the last few weeks. It’s an amazing feeling to make the final. The last few weeks our confidence has been building so we’ll see who we end up playing tomorrow and then come Tuesday we’ll focus on the game.” 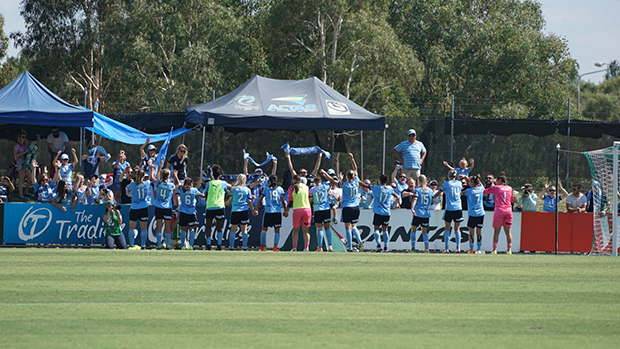 61’ SPENCER GOAL – A lofted ball into the box isn’t dealt with by United keeper Williams, who calls for a foul, as Jasmyne Spencer is first to the second ball to sweep home for the solitary goal of the match.

9’ SIMON SHOT – A square ball finds Simon in the area and the Westfield Matilda turns to create space before firing just wide of the far post.

12’ BRUSH HEADER – A Canberra corner is floated to the far post and it finds Ellie Brush leaping highest with her header producing a sharp save from Michelle Betos.

35’ BETOS SAVE – Ashleigh Sykes charges at the Sky Blues defence before firing a powerful at effort at goal, however Michelle Betos is equal to the effort with an acrobatic save to tip it over the bar.

36’ SPENCER SHOT – Nicola Bolger sends an inch perfect through ball to Spencer who charges onto it in the area however her shot flashes across the face of goal.

43’ SPENCER HITS THE POST – Jasmyne Spencer weaves her way into the area before cannoning a shot off the upright in the final chance of the half.

58’ KENNEDY FREE KICK SAVED – Alanna Kennedy curls a neat free kick up and over the wall forcing Williams into a diving save to tip the effort over the bar.

59’ BETOS SAVE – Michelle Betos is quick off her line to smother the danger as Canberra look to capitalise on a bouncing ball in the box.

81’ SYKES MISS – Canberra break and the cutback finds Sykes lurking near the penalty area, however the Canberra forward scuffs her effort and it’s saved.

87’ FLANNERY CHANCE – A corner isn’t properly cleared and the ball back into the Sky Blues area lands at Flannery two yards from goal, however Renee Rollason produces a timely intervention to deny.

90+1’ WILLIAMS SAVE – Sydney FC break two on one through Jasmyne Spencer and the American squares to Kyah Simon in the box, however the Westfield Matilda takes one too many touches as Williams saves from close range.

Sydney FC Head Coach Dan Barrett named an unchanged lineup to the side that faced Melbourne City last Saturday, as Elizabeth Ralston and Alanna Kennedy continued their central defensive partnership with Renee Rollason remaining on the bench for her second match back from injury.