Sydney FC can lay claim to their youngest Member ever, with baby Maya being registered as a 2016/17 Member only three hours after being born.

Pronounced My-ya, the young girl was signed up while still in the delivery suite of Royal North Shore Hospital by her father Vinay.

Born early in the morning, Vinay wasted no time in signing her up as soon as the Sky Blues’ Membership department opened.

“She was born shortly after 6am, and I called as soon as soon as the business day started at 9am to sign her up,” Vinay said.

Vinay said he has high hopes for his daughter, with a mini football netted goal and ball already set up in his living room.

“Thankfully she has my long legs, but I hope she doesn’t inherit my terrible football skills.” 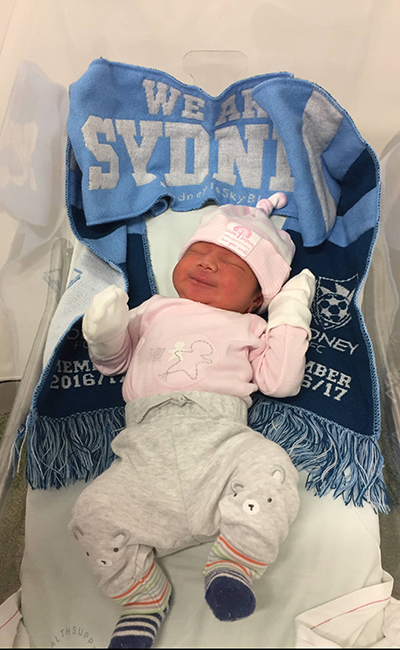 Westfield W-League Head Coach Dan Barrett, who signed his own baby girl up as a Baby Blue, expressed his delight at the Sky Blues’ latest Member.

“With women’s football now the fastest growing sport in the country, it’s great to see such excitement in the community,” he said.

“It’s fantastic to have another female Member on board for the season. Maya is Sky Blue from the start and who knows, perhaps there’s a Westfield W-League future there for her.”

Maya is a Sydney FC Baby Blue member, which is available for as little as $40, and includes a baby certificate and blanket.

Sydney FC’s Westfield W-League squad kick off their season away to the Brisbane Roar on Saturday 5 November (kick off 5pm). Follow @SydneyFC on Twitter for score updates.