Sydney FC put up a fine battling effort against the league leaders but a Joey Gibbs double helped Blacktown City maintain their lead in the PlayStation®4 National Premier Leagues NSW Men’s competition with a 3-1 win at Lily’s Football Centre on Sunday afternoon.

Gibbs opened the scoring early on after steering home a simple tap in and claimed his brace and Blacktown’s third five minutes into the second half with a similarly easy finish at the back post.

Sydney FC had earlier restored parity midway through the first half thanks to a superb Charles Lokolingoy effort but a Mitch Mallia strike on the cusp of half time proved a crucial blow to the Sky Blues who were unable to prevent the hosts from a fifth consecutive win.

Robert Stanton’s side enjoyed decent spells throughout the match against a heavily rotated Blacktown City outfit but were undone by the ruthlessness of City’s forwards with Mallia and Gibbs in particularly lethal form.

The pair combined for the first goal of the match after Liam McGing was robbed inside his own penalty area by Mallia who slid the ball to an unmarked Gibbs to bury his eighth goal of the campaign.

It had otherwise been a promising start for Sydney FC and the Sky Blues equalized with the standout moment of the encounter when a Juan Zapata-led counter attack ended with a deadly curling strike from front man Lokolingoy. 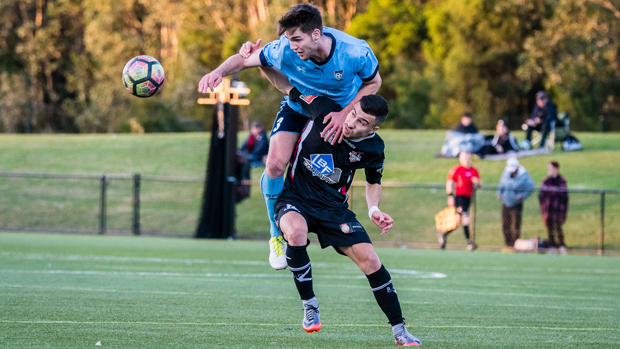 The visitors could have snatched the lead moments later when Patrick Flottman met Cristian Gonzalez corner but the defender flicked his header over the bar.

It proved a costly miss for the Sky Blues with Mallia restoring Blacktown’s advantage on the cusp of half time after a well-placed effort from outside the box curled past Sydney gloveman Thomas Heward-Belle.

Mark Crittenden introduced James Andrew shortly after the interval and the City speedster immediately forced Heward-Belle into a smart stop at the near post before playing a crucial role in Blacktown’s third.

Andrew released Giorgio Speranza inside the box and the fullback’s cutback was slammed home at the back post by Gibbs.

Sydney held plenty of possession after Gibbs’ second but were unable to carve a way through the City rearguard, although Tristan Prendergast did make an excellent save to parry a sweetly-struck Gonzalez free kick.

Mallia also enjoyed two late chances to grab a double but saw both efforts fly past the post, while Peter Cejka was denied his first goal for Blacktown late on with Heward-Belle producing a good reaction stop from close range.