Sky Blues Turn In Performance Of The Season

Sydney FC recorded their performance of the season on Tuesday afternoon as they demolished Canberra United at Lambert Park, Leichhardt, 6-1 in front of a bumper crowd of 1027.

Sydney FC recorded their performance of the season on Tuesday afternoon as they demolished Canberra United at Lambert Park, Leichhardt, 6-1 in front of a bumper crowd of 1027.

The Sky Blues dominated the opening 45 minutes and were duly rewarded for their efforts through goals to Nicola Bolger and Remy Siemsen, as they took in a healthy two goal lead at the break.

The dominance continued after the re-start, as the flood gates opened with Kyah Simon and Remy Siemsen extending the lead to four nil before the Sky Blues were reduced to 10 players as Alanna Kennedy received her marching orders for a second bookable offence.

Yukari Kinga clawed a goal back for Canberra from the resultant free kick, however the dismissal proved little for Sydney FC as Francisca Ordega bagged her first goal for the Sky Blues minutes later, before Leena Khamis added gloss to the result with 10 minutes remaining to round out the scoresheet at 6-1.

Sydney FC return to Westfield W-League action on Sunday 8 January at the revised venue of Allianz Stadium against Melbourne City (kick off 2:30pm). 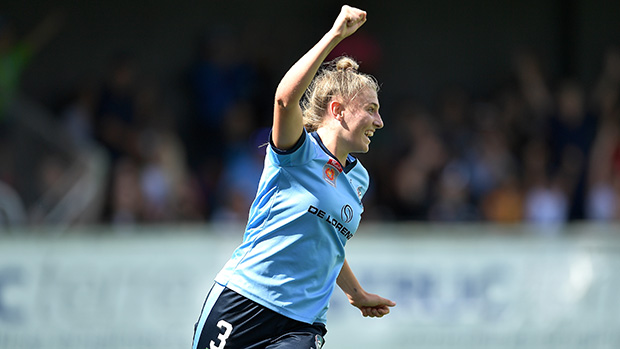 Head Coach Dan Barrett: “It was a great performance by the girls. We won that game off the back of our pressure, we pressed them very high and very hard and we didn’t allow them to play, and off the back of that we created some good chances as well and scored. It was our performance of the season and I think a performance like that has been building and it was fantastic to get that today. We’ve got more in us, we’ve won nothing yet, we have to keep going and keep putting in those performances now.”

16’ BOLGER GOAL – Nicola Bolger steps up to curl a free kick into the Canberra box from range and the ball bounces un-met into the net at the far post.

25’ SIEMSEN GOAL – Francisca Ordega has an effort from long range deflected and Siemsen is quickest to react, pouncing on the loose ball and coolly prodding home from close range.

52’ SIMON GOAL – Remy Siemsen plays it to the feet of Leena Khamis who hooks the ball into the path of Kyah Simon on the turn, and the Westfield Matilda makes no mistake prodding past the onrushing keeper.

56’ SIEMSEN GOAL – Francisca Ordega crosses to Leena Khamis who beats the committed Trudy Burke in goal before passing on the ground to Siemsen who taps it into the empty net.

65’ KINGA GOAL – Yukari Kinga curls a set piece effort inside the near post to claw a goal back for Canberra.

67’ ORDEGA GOAL – Francisca Ordega bags her first goal for the Sky Blues as she latches onto an incisive through ball from Leena Khamis to tap beyond the keeper.

81’ KHAMIS GOAL – Caitlin Foord breaks free to the byline and she cuts it back to the falling Leena Khamis who toe pokes it beyond Burke.

18’ LEENA KHAMIS CHANCE – Leena Khamis pounces on a ball over the top and attempts to chip Burke but her effort sails wide.

21’ SIEMSEN OFFSIDE GOAL – Neat interplay between Leena Khamis and Caitlin Foord ends with Foord crossing for Siemsen to convert, however the young forward is flagged offside.

40’ RASO SHOT – Hayley Raso breaks through the Sky Blues defensive line to fire at goal but Sham Khamis is equal to the effort to save.

58’ FOORD CHANCE – Georgia Yeoman-Dale carries the ball to the byline before cutting back to Caitlin Foord who blasts just wide at the far post.

63’ KENNEDY SENT OFF – Alanna Kennedy is given her marching orders for a second bookable offence as she charges into the back of Grace Maher.

69’ DE VANNA CHANCE – Lisa De Vanna is picked out unmarked inside the Sky Blues penalty area but she loops her header high over the bar.

78’ KHAMIS SAVE – Sham Khamis stands tall to deny Ashleigh Sykes after she pounced on a loose ball and swept it at goal.

Head Coach Daniel Barrett made two changes to that defeated the Western Sydney Wanderers last round, with Hannah Bacon and Princess Ibini making way for Teresa Polias, returning from suspension, and Remy Siemsen, while Caitlin Foord was shifted to left back.