Sydney FC achieved one of their finest ever performances in Asia defeating three time AFC Champions League winners Pohang Steelers on their home turf at Steelyard Stadium to go top of Group H.

Sydney FC achieved one of their finest ever performances in Asia defeating three time AFC Champions League winners Pohang Steelers on their home turf at Steelyard Stadium to go top of Group H.

Sydney FC now return to Australia on Friday, as they travel to Gosford to face the Central Coast Mariners on Saturday at Central Coast Stadium in the Hyundai A-League.

Graham Arnold: “It’s a massive win. You have to get three points at home and if we get our points at home now we’re through to the round of 16 so it’s a fantastic achievement for Sydney FC. I know that in the Wellington game we let ourselves and the fans down and hopefully this will repay them.”

41’ NAUMOFF GOAL – Blackwood receives the ball, slides it between the Pohang defence to Naumoff who is unmarked on the right and he blasts it into the top of the net. 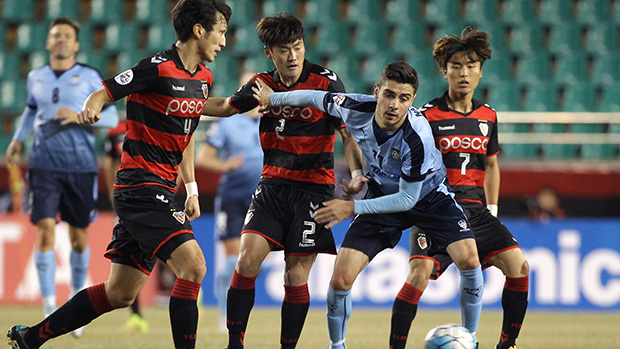 13’ BLACKWOOD SHOT – A Naumoff corner from the right is won in the air by Blackwood at the near post but drifts just over the bar.

14′ BLACKWOOD CHANCE – Blackwood springs the offside trap, charging towards a loose ball, but the keeper is quick off his line.

27’ ABBAS CLEARANCE – Daeho charges down the left and crosses, it’s flicked on at the near post but Abbas is there at the far post to clear just as Sangwoo looked to strike.

40’ SIMON CHANCE – A right wing cross from Ryall is sliced up in the air by a Pohang defender above the keeper’s head where Matt Simon challenges the keeper but the latter gets a hand to punch clear.

53’ GREAT CHANCE SYDNEY – Blackwood breaks on the counter attack and finds Matt Simon on the right of the box who moves inside and finds Naumoff free 8 yards out but the keeper is out quickly to force him wide and when the Young Socceroo pulls the ball back to Blackwood 6 yards out his misses the ball which comes to Hoole to shoot at goal on the right but he blasts it over the bar. 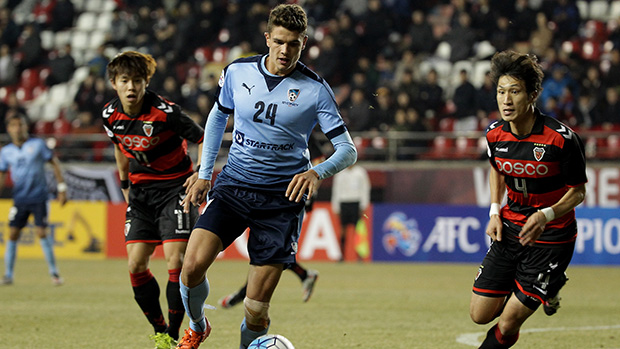 Sydney FC Head Coach Graham Arnold recalled Zac Anderson to the heart of the Sydney FC defence with Seb Ryall moving to right back and Aaron Calver to the bench.  Ali Abbas came into the left full back position in place of Rhyan Grant.  Mickael Tavares came into the centre of midfield alongside Milos Dimitrijevic with Brandon O’Neill moving to the bench.  Andrew Hoole and Christopher Naumoff took the places on the right and left wing with David Carney rested for the Hyundai A-League campaign and Stambolziev on the bench.  Matt Simon partnered George Blackwood up front with Smeltz rested and Ninkovic out with an ankle injury. Max Burgess , Alex Mullen and Riley Woodcock made up the rest of the substitutes.