Sydney FC’s much heralded start to the Hyundai A-League 2016/17 season has forced the record books to be re-written, with stat after stat glowing in the Sky Blues favour.

After 14 games the Sky Blues have eclipsed all before them to record the best points total of any team at this stage of the season.

The Sky Blues seven goals against is the fewest conceded at this stage of the season in the competition’s history.

Coupled with this is the attacking prowess of Head Coach Graham Arnold’s outfit, with the squad scoring only one goal less (34) than the record for 14 games into the season.

Sydney FC have been top since Day 1 of the season.

Harking back beyond the Hyundai A-League, Sydney FC’s start to the season after their first 12 games surpasses anything seen before in 40 years of Australian national football history, according to statistician Andrew Howe.

In the old NSL, Marconi in 1978 and APIA Leichhardt in 1987 set a record of eight wins and four draws to start a season, with Sydney FC demolishing this record after their corresponding 12 games, recording nine wins and three stalemates.

The Sky Blues are still on course to break APIA’s all-time record of going the first 20 league games of the season unbeaten and will look to continue that in the second #SydneyDerby of the season at Allianz Stadium on Saturday night. 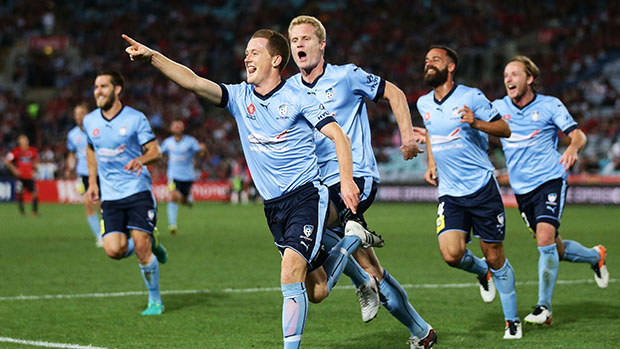 Sydney FC are undefeated in their past eight derbies, registering six wins and drawing two matches since March 2014.

As of Tuesday 10 January, 2017 it has been exactly three years (1095 days) since the Western Sydney Wanderers last defeated the Sky Blues in a Hyundai A-League #SydneyDerby.

With the Sky Blues on top of the Hyundai A-League ladder and our Westfield W-League team on top of their ladder Sydney FC have become only the third team to have both teams lead their respective leagues at the same time.

Sydney FC take on the Wanderers in their only home #SydneyDerby of the Hyundai A-League 2016/17 season on Saturday 14 January (kick off 7:50pm). Be there to back your Sky Blues in this massive clash.