Sydney FC took all three points from a stirring clash with Bonnyrigg White Eagles on Saturday night to secure a 3-1 victory in the penultimate round of the PlayStation®4 National Premier Leagues NSW Men’s regular season.

John Iredale put Sydney FC into the lead midway through the half before Asmir Kadric levelled for the visitors a little over ten minutes later.

However, the hosts would go into the break in front after debutant Jerry Skodatis finished off a remarkable team move, and sealed their win in the 76th minute when Iredale scored his second of the game.

Sydney FC started strong, with Juan Zapata’s influence in the midfield immediately obvious as he pulled the strings for Iredale up front. Despite dominating early possession, the hosts were tested by Bonnyrigg’s Jacob Ott, who hit a tame shot at Thomas Heward-Belle in the Sydney FC goal before playing in Shervin Adeli, whose attempt was again saved by the keeper.

Without having offered up any serious attempt on goal, Sydney FC took the lead in the 26th minute, when Iredale charged down a bouncing ball just past the halfway line, and held off the chasing defenders to poke a sharp shot past the onrushing Ryan Norvall.

The hosts might have doubled their advantage minutes later when a goalmouth scramble saw Brendan Curtis eventually put a header over the bar. They were made to rue their miss soon after when Asmir Kadric hit an equaliser for Bonnyrigg, finishing a sweeping move which might have seen a penalty awarded for a push in the box seconds before the goal.

Determined to restore their lead before the break, Sydney FC pushed forward and scored an incredible team goal a few minutes before halftime, with Jerry Skodatis finishing one of the goals of the season with a calm, low shot past Norvall. 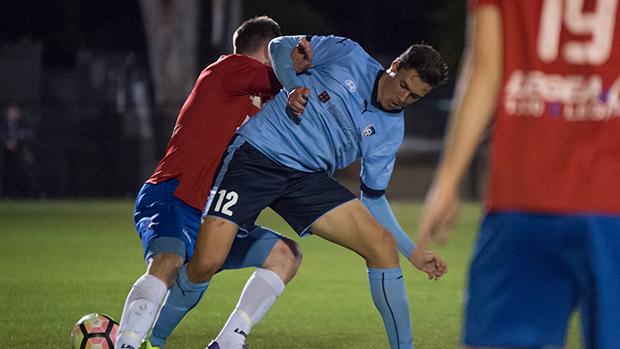 The second half was slow to start, and neither side threatened the other’s goal again until the hour mark when Kadric jumped to meet a cross at the near post, but Heward-Belle was well-positioned to make the save.

Five minutes later, Iredale picked up his second goal of the night after being played in by Sam McIllhatton. The game broke down somewhat soon after the goal as tempers flared and both managers made a number of substitutions.

Bonnyrigg looked to finish strongly but were left frustrated by a resolute Sydney FC defence led by the impressive Patrick Flottmann, while McIlhatton might have scored a fourth for the hosts after charging down a clearance and weaving behind his defender, but his shot was weak and Norvall was able to get down to make a simple save, keeping the final score at 3-1.

“Some of the stuff Graham Arnold is doing with the first team, we’re trying to do here. Tonight we were also physically right in it, so we’re seeing things come together.

“Our second goal was something special. We’ve done little bits and pieces on that kind of play [in training], but you really can’t coach that – it was fabulous, an unbelievable team goal. I’m so proud of the boys for the result, and I’d like to think that we were entertaining, too.”

“I’m a bit disappointed, of course,” said Bonnyrigg’s Brian Brown.
“It’s been a horrendous season for us and I thought tonight’s performance summed it up – we lacked the heart and passion that a Bonnyrigg team should have.”

“Sydney FC showed the way that the game should be played. They had energy and enthusiasm, and I thought they played really well.”