An Andrew Redmayne penalty save was the highlight for Sydney FC as the Sky Blues put in a fighting performance against English Premier League giants Arsenal FC, in front of a sell-out crowd at ANZ Stadium on Thursday night.

The visitors wasted little time asserting their authority on the contest, and were duly rewarded inside the opening four minutes after captain Per Mertesacker found the back of the net from the corner.

Despite the early goal, the Sky Blues soon found a grip on the game and were unfortunate not to have equalised after Matt Simon’s follow-up effort, from a Joshua Brillante shot, hit the post from close range.

Keeper Redmayne made a number of fabulous saves including the penalty from Danny Welbeck after the referee had awarded a spot kick harshly against Seb Ryall, when the ball appeared to hit his back rather than his hand.

While the defending A-League Champions came close to finding the back of the net numerous times during the second half, the Gunners remained unperturbed as new signing Alexandre Lacazette doubled his side’s lead with five minutes remaining.

Graham Arnold: “I’ve always had a lot of faith in Andrew Redmayne. He’s copped a bit of harsh criticism over the last couple of years, but two years ago he got to the Grand Final as a number one keeper. He is the number one keeper, we’re fortunate that we had two number ones last year, and the plan in the recruitment is to get another number one goalkeeper in to make the competition for places good. I was very happy for him tonight against the team he idolises.

“I think the attitude was very good, it’s a great opportunity for the boys, especially the young ones to see where they’re at. Positives was Redmayne and Paulo Retre at right back I thought was very good, young Chris Zuvela when he came on was very good as well so overall I’m happy. It was a fantastic experience and a good start for us in the fact there were no injuries.”

4’ MERTESACKER GOAL – Sydney fail to clear the ball out from the corner, allowing Mertesacker to volley home from close range.

83’ LACAZETTE GOAL – Lacazette arrives unmarked inside the box to fire the ball home and double his side’s lead. 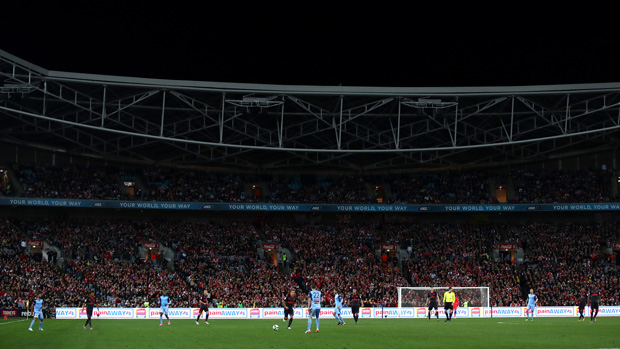 34’ BRILLANTE CHANCE – Brillante bursts past Mertesacker and into the box before firing a shot that forces Cech to make a save down to his right.

34’ SIMON CHANCE – Simon chases the loose ball, but his follow-up attempt hits the post and bounces out.

35’ REDMAYNE SAVE – Redmayne prevents both Walcott and Coquelin from finding the net with two saves in quick succession.

42’ REDMAYNE SAVE – Redmayne makes an outstanding save from close range to deny Willock after the youngster weaved his way into the box with a lovely piece of skill.

50’ ZUVELA CHANCE – Zuvela fires a curling effort from the edge of the box, but Martinez is able to make the save.

54’ ARSENAL PENALTY – The referee awards Arsenal a penalty after adjudging Ryall to have handled the ball inside the box. Replays show the ball hit his back.

56’ REDMAYNE SAVE – Redmayne dives to his right and saves Welbeck’s penalty.

66’ LOKOLINGOY CHANCE – Lokolingoy’s deflected effort on goal calls Martinez into action with a diving save low to his left.