The spoils were shared in the second Westfield W-League Sydney Derby of the season with nothing able to separate the Sky Blues and Wanderers, who finished with two goals a-piece, in a physical affair at Lambert Park on Sunday.

The spoils were shared in the second Westfield W-League Sydney Derby of the season with nothing able to separate the Sky Blues and Wanderers, who finished with two goals a-piece, in a physical affair at Lambert Park on Sunday.

Alanna Kennedy got the Sky Blues off to the perfect start as she curled in a magnificent set piece from the edge of the area nine minutes in, in what was an otherwise scrappy opening 10 minutes with neither side able to retain any meaningful possession.

The Sky Blues were on the front foot after their goal however the Wanderers found an equaliser on the counter as Hannah Beard raced into the area to restore parity in the 19th minute.

The first half was played out in a typically physical manner with Michelle Betos denying Keelin Winters from the penalty spot in the 36th minute in what proved the final chance of the half.

The second 45 was played out at the same fervent tempo with heavy challenges from both sides highlighting the affair.

Kyah Simon looked to have handed the Sky Blues the three points as she rolled the ball home in the 73rd minute after a spate of Sydney FC chances however substitute Elizabeth Grey ensured the Wanderers shared the points as she swept home for the equaliser with minutes remaining. 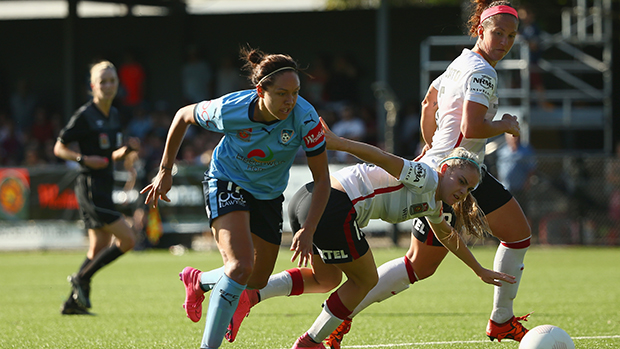 Daryl Darke: “I definitely think it’s two points that we dropped today. We went out with a really positive game plan and I think we executed that quite well, I think we just didn’t go for the jugular when we had the opportunity. I think our build up play and playing out from the back was quite good. Princess Ibini showed what potential class she’s got today and I think Kyah getting off the duck and scoring some goals is another massive positive. Alanna’s goal, she’s been putting them away quite regularly at training, it was a special strike.” 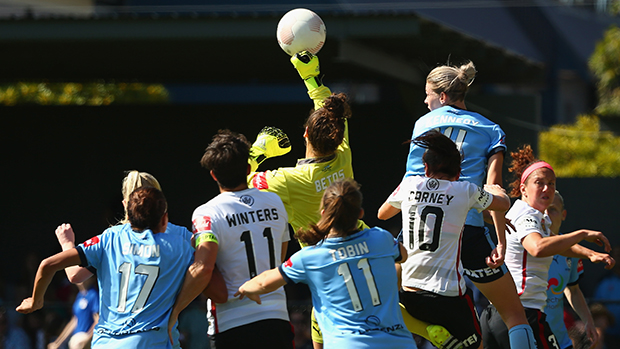 9’ KENNEDY GOAL – Taking a set piece on the edge of the Wanderers box, Kennedy steps up to curl the free kick up and over the wall into the top left corner of the goal.

19’ BEARD GOAL – Turning Teigen Allen on the edge of the area, Beard charges into the box before side footing the ball beyond Betos.

73’ SIMON GOAL – Kyah Simon receives the ball in the box with her back to goal before turning her marker and rolling the ball into the bottom corner.

84’ GREY GOAL – Elizabeth Grey sweeps home for the equaliser from the edge of the area after being found by a neat cut back from Alix Roberts. 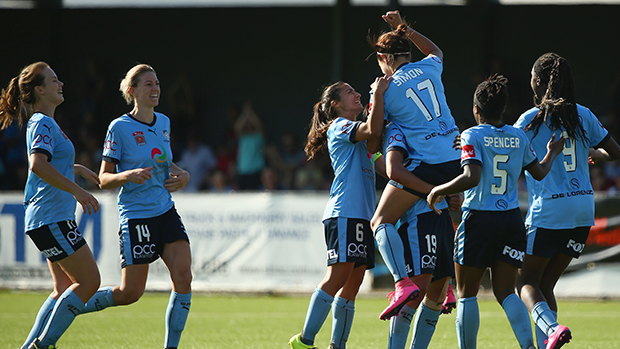 12’ SPENCER SHOT – Receiving the ball with her back to goal, Spencer controls and turns to shoot at goal however her shot is straight at the keeper.

35’ BETOS PENALTY SAVE – After giving away the spot kick off a corner kick, Michelle Betos proves up to the task as she dives low to her right to deny Winters from  12 yards.

64’ SPENCER SHOT – Jasmyne Spencer surges forward with the crowd off their feet, she eludes one tackle before unleashing from outside the area however her shot sails wide.

70’ IBINI CHANCE – Amy Harrison floats a fantastic ball to the far post however a diving Ibini can’t prod the ball home and the Wanderers clear.

73’ IBINI SHOT – Ibini carries the ball forward on the left flank but her powerful curling effort doesn’t have enough dip and it flies just over the bar.

83’ SIMON SHOT – With time and space in the area Kyah Simon unleashes from an acute angle with her powerful effort sailing just the wrong side of the upright.

Sydney FC Head Coach Dan Barrett welcome back his Westfield Matildas Amy Harrison, Alanna Kennedy and Kyah Simon to the starting line up following their absence from the match in Adelaide last weekend. Princess Ibini kept her place in the first 11 to make her second Westfield W-League start while Ellyse Perry was the only absence from the squad that defeated Adelaide United, missing out through cricket commitments. Hannah Bacon appeared on the bench for the first time after being promoted from the train on squad.