Sydney FC and Melbourne City were forced to share the points in their Westfield W-League Grand Final re-match at Allianz Stadium on Sunday.

Sydney FC and Melbourne City were forced to share the points in their Westfield W-League Grand Final re-match at Allianz Stadium on Sunday.

Second half goals to Caitlin Foord and Jessica Fishlock earned the share of the points in a tense and tight encounter that saw both sides threaten throughout.

The result, Sydney FC’s first draw of the season, sees the Sky Blues remain top of the Westfield W-League ladder with the squad having the BYE in the next round.

Head Coach Dan Barrett: “It was a close game, a battle of styles a little bit there and it was very very tight. I felt like we could have won the game, I’m happy to take a point but disappointed we didn’t take three. We’ve had a heavy schedule the last couple of weeks so we’ll take heart from the BYE, freshen up and keep going for the rest of the season.” 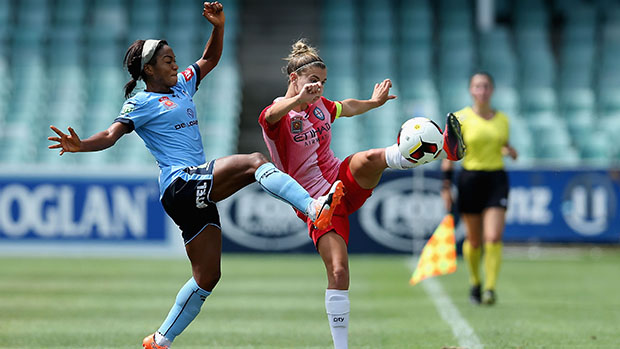 67’ FOORD GOAL – Caitlin Foord charges onto a loose ball just beyond halfway and carries it into the box, beating two defenders, before sweeping home with her left foot to break the deadlock.

75’ FISHLOCK GOAL – Stephanie Catley finds space on the left to float a cross into the area and Jessica Fishlock rises highest to head beyond Sham Khamis to equalise.

6’ YEOMAN-DALE HITS POST – Georgia Yeoman-Dale breaks down the right flank and her lofted cross floats into the near post with the keeper beaten.

35’ BOLGER OFFSIDE GOAL – Teresa Polias fires in a low cross after her initial corner was cleared, and Nicola Bolger backheels the ball into the net only to be flagged for offside.

77’ SIEMSEN OFFSIDE GOAL – Kyah Simon hooks a ball into the path of Siemsen in the box on the turn and the youngster slots the ball home only to be ruled out by the offside flag.

88’ FISHLOCK SHOT – Jessica Fishlock pounces on a loose ball before unleashing from distance and her effort sails just over Sham Khamis’ crossbar.

Head Coach Daniel Barrett made just the one change to the squad that thrashed Canberra United midweek as Servet Uzular moved to centre back in place of the suspended Alanna Kennedy.