Sydney FC remain top of the league and have set a new record for their best ever start to a season after their scoreless draw with Adelaide United on Friday night.

With the teams separated only by goal difference heading into the match the opening minutes were cagey before Adelaide United enjoyed spells of possession in the first half for no reward.

Both sides headed in level at the break before a re-invigorated Sydney FC side emerged for the second half, creating a number of chances in stifling conditions in South Australia.

The Sky Blues thought they had taken the lead in the 68th minute after Nikola Petkovic curled in a long range free kick, however it called back after the kick was taken before the referee blew his whistle.

Adelaide troubled late on with Carrusca missing a prime opportunity from seven yards after Kamau had cut the ball back, however both sides were forced to settle for a draw with Vedran Janjetovic putting in a performance worthy of man of the match.

Graham Arnold: “We’re getting closer to being the finished product. We’ve still got a long way to go and the pleasing thing was defensively we were very strong again. They had probably a couple of better chances but we had chances as well and hit the post but overall, happy to go away with a point.

“Overall the game could have gone either way but to come here to Adelaide, and they’re in hot form at the moment, and to get a nil-nil we’re happy.”

1’ JANKO EFFORT – The Sky Blues venture up the pitch in the first play of the match with the loose ball falling at the feet of Janko however the Austrian strikers’ effort is tame and Galekovic gathers.

15’ JANKO SHOT – Marc Janko bursts into the box after Adelaide give away possession in their half. Janko out-muscles his marker in the area but his dangerous cut back is deflected out.

16’ JANJETOVIC SAVE – Marcelo Carrusca is found in the box by Cirio however Janjetovic stands tall to palm away Carrusca’s strike at his near post.

21’ ELRICH TACKLES – A fantastic slide ball from Bernie Ibini releases Gameiro in the area however Tarek Elrich times his tackle to perfection as he slides in to disposes the Olyroo as he winds up to shoot.

32’ NAUMOFF CLEARS – The Sky Blues fail to deal with a corner and as the ball bounces around the box Mabil fires on target however Christopher Naumoff is on hand to scoop the ball off the line and clear the danger.

41’ CIRIO HITS THE POST – A loose ball falls to Cirio who races into the box however his side footed effort slams against the post and out for a goal kick.

65’ RYALL DIVING HEADER – After Galekovic fails to deal with a corner a spectacular bicycle kick from Bernie Ibini at the far post flies across goal to Seb Ryall whose diving header is cleared off the line by Nigel Boogaard.

66’ JANJETOVIC PARRY – Awer Mabil gets his head to a whipped cross and bullets a header towards goal however Vedran Janjetovic produces a terrific reflex save to nullify the danger.

68’ PETKOVIC GOAL PULLED BACK – After Terry Antonis is fouled, and with the referee failing to indicate to wait for a whistle, Nikola Petkovic powers the free kick into the back of the net. The goal is ruled out though for taking the free kick before a whistle was blown.

78’ ELRICH INTERVENTION – In his first Hyundai A-League appearance for the club Shane Smeltz curls a cross to the back post towards Janko who appears to rise highest, however Tarek Elrich nips in to head the ball to safety.

85’ JANJETOVIC STOP – Sergio Cirio races into the area however Janjetovic is off his line quickly to narrow the angle and smother the shot.

90+2’ SMELTZ SHOT – Eugene fails to fully punch clear a corner and it falls to Shane Smeltz. With his back to goal, the New Zealand international hooks the ball towards goal however it lands on the roof of the net in what was the final chance for the Sky Blues.

Head Coach Graham Arnold made one change to the starting line up from the team which defeated the Central Coast Mariners on Sunday. With Alex Brosque failing a late fitness test, youngster Christopher Naumoff came into the starting side as Nikola Petkovic was handed the captain’s armband. There was a first appearance for Shane Smeltz too as the New Zealand international returned to the bench after his injury layoff. 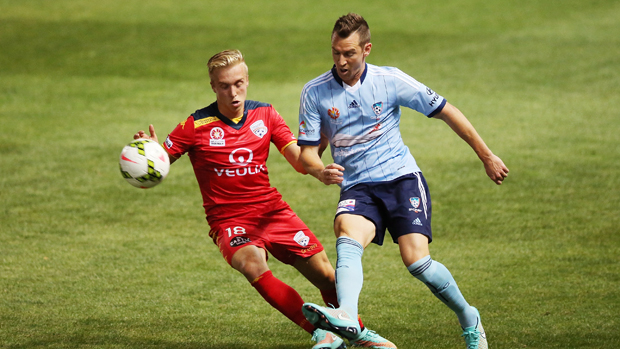