The Sky Blues took the game to Marconi early and within three minutes had their first strike on goal as Juan Zapata side footed his attempt inches past the post.

Charles Lokolingoy then had the ball in the back of the net after 11 minutes only to be ruled offside by the slightest of margins as Marconi breathed a sigh of relief.

Lokolingoy was in action again only minutes later when a pass from William Mutch across the face of goal was blasted over the bar by the big striker only metres out.

On the 20 minute mark a double chance fell to Lokolingoy from close range but he was first denied by the Stallions keeper Chad Taylor and then the follow up shot was cleared off the line by Marconi defender Peter Marcovic.

Marconi had their first real opportunity on the half hour mark when a Sean Rooney shot rolled wide of the post just before some sharp keeping by Mitch Evans denied Mirjan Pavlovic before the break with the scores still locked at 0-0.

Head Coach, Rob Stanton, was very pleased with the 1st half performance despite having no goals to show for it. He warned his players not to drop the intensity and reminded them of the danger Marconi had upfront in three former Hyundai A-League players Pavlovic, Rooney and Marko Jesic who between them had scored 49 goals this season.

The second period started brightly for the Sky Blues with Zapata causing havoc with his twisting tricky runs and the pace of Lokolingoy, Arditti and Mutch testing the Marconi backline on each occasion.

This was best demonstrated in the 57th minute when a wayward shot by Rooney saw Sydney FC explode from the ensuing goal kick down the right hand side of the park. Mutch outpaced his fullback and burst into the penalty area, he then cut the ball back for Lokolingoy who was steaming in to slot home his 23rd goal of the season to give Sydney FC a well-deserved 1-0 lead. 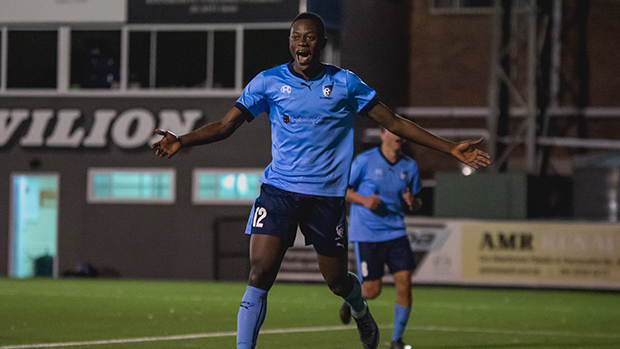 Marconi went close with a long range effort that hit the post and bounced into the grateful arms of Evans which was then followed by a curling shot from Sky Blue defender Brendan Curtis that also hit the post at the other end much to the relief of Stallions keeper Taylor.

Two excellent saves at either end by each keeper kept the scores at 1-0 while Arditti had a final chance to double the lead for Sydney FC but spurned his opportunity when one on one with the Marconi custodian, however it had no bearing on the result as the final whistle blew at 1-0 for Sydney FC.

The Sydney FC backline of Nicola Kuleski, Young Socceroo centre backs Patrick Flottmann and George Timotheou, along with Curtis and Evans stood tall in keeping the Marconi front line trio scoreless for the first time this season while skipper Daniel Araujo turned in another scintillating performance despite the close marking efforts of the Stallions midfield.

The earlier 4-2 win by the Sky Blues’ Under 20’s, also coached by Rob Stanton, who scored their one hundredth goal in the process, combined with the First Grade result secured the Club Championship trophy for Sydney FC with an unassailable forty eight point lead over Western Sydney Wanderers and with that promotion to the PlayStation 4 NPL 1 NSW Men’s competition in 2017.