It was the Sky Blues who took the lead courtesy of a Melbourne own goal before Barbarouses hit back for the away team to see the two sides level at the break.

The visitors struck next and quickly after the break as Troisi buried his close range effort.

With time winding down, Arnie’s men through everything at the opposition and it paid dividends with a mere 13 seconds of time remaining as former Sky Blue Antonis popping the ball into his own net and sending Allianz into a frenzy.

Unfortunately, it was Antonis who restored the visitors lead with almost no time to spare and it was to be the last action of the game, ending the Sky Blues season.

It also marked the end of an era with the game being the last at Allianz Stadium as well as Graham Arnold’s last in charge of the club. 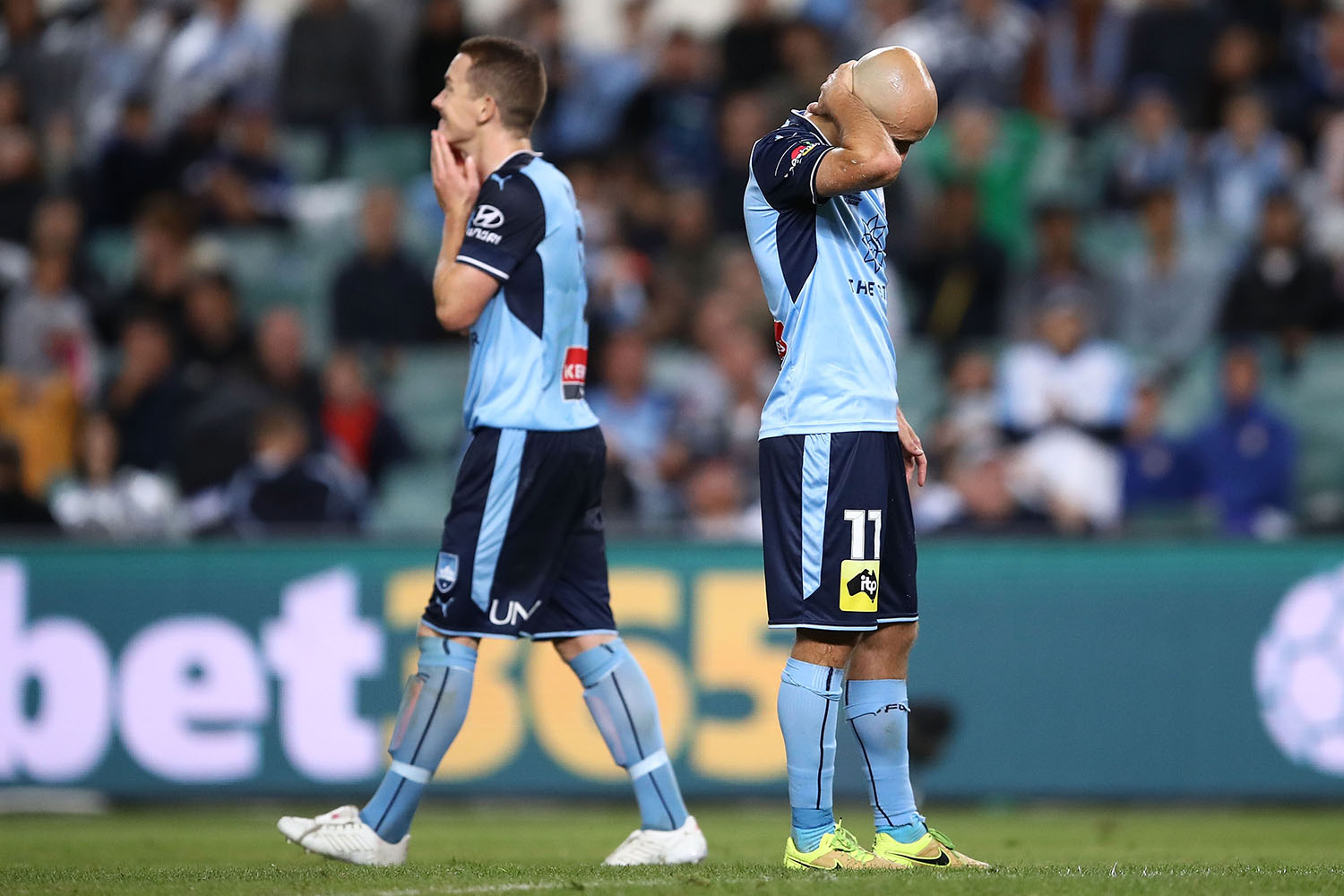 “It’s a crazy game. We score two own goals and they got two or three deflections but that’s finals football.

“I said to the boys nothing can take away from what we’ve done over the past two seasons; 31 points ahead of second combined, 20 points ahead of Melbourne but these are one of games and these things happen.

“It was a very frustrating night, it didn’t flow a lot. Zullo and Bobo were spent so we were playing with eight men for the end of extra time.

“The boys are devastated. Sometimes you wish for fairy-tales and to go out on a high with a trophy. I wish both Newcastle and Melbourne all the best for next weekend.

“I didn’t prepare for the speech I just made to the boys. It’s a strange feeling not having work tomorrow. It’s sad; I’ve had four wonderful years here, two grand finals and a preliminary final.

“It’s been an honour to coach for this club and I will be back at Sydney FC one day. 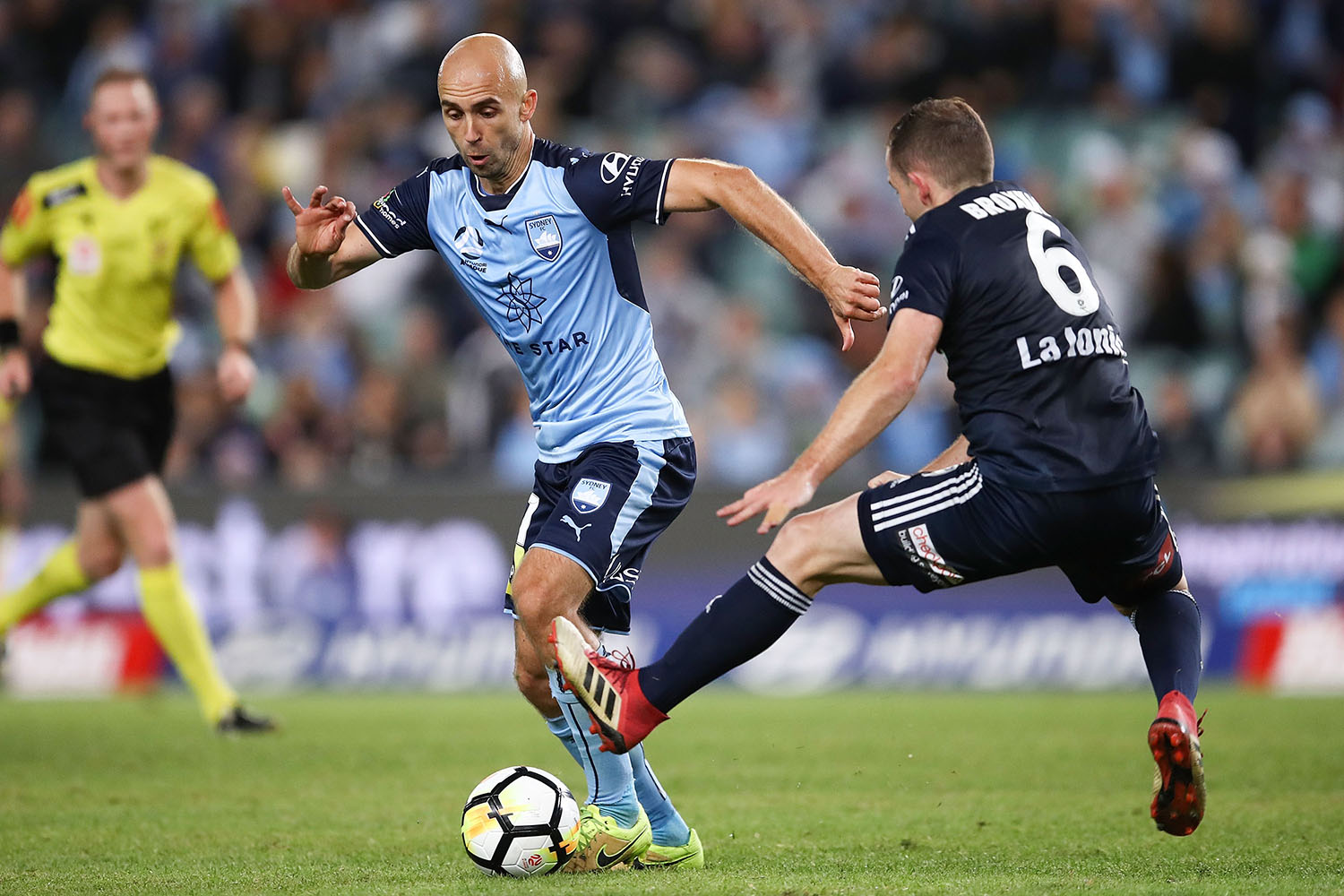 24’ NIGRO SCORES AT HIS OWN END (OG) – A Mierzejewski freekick proves too much to deal with as it ricochets off the chest of the Melbourne centre-half to put the Sky Blues into the lead.

31’ GOAL BARBAROUSES – Antonis plays the opposition winger down the left before he cuts in and fires a shot which cruelly deflects off Buijs, sending Redmayne the wrong way.

47’ GOAL TROISI – A lapse in concentration allows Berisha to find the ball and play a reverse pass in behind the Sky Blues defence for a close range goal for Troisi.

90+5’ ANTONIS (OG) – Absolute desperation from the Sky Blues pays off in the knick of time as a squared ball from Adrian is put into the roof of the net by former Sydney FC player Antonis. Extra Time beckons!

117’ GOAL ANTONIS – Antonis alludes defenders down the wing to drive into the box with his deflected shot finding the back of the net. 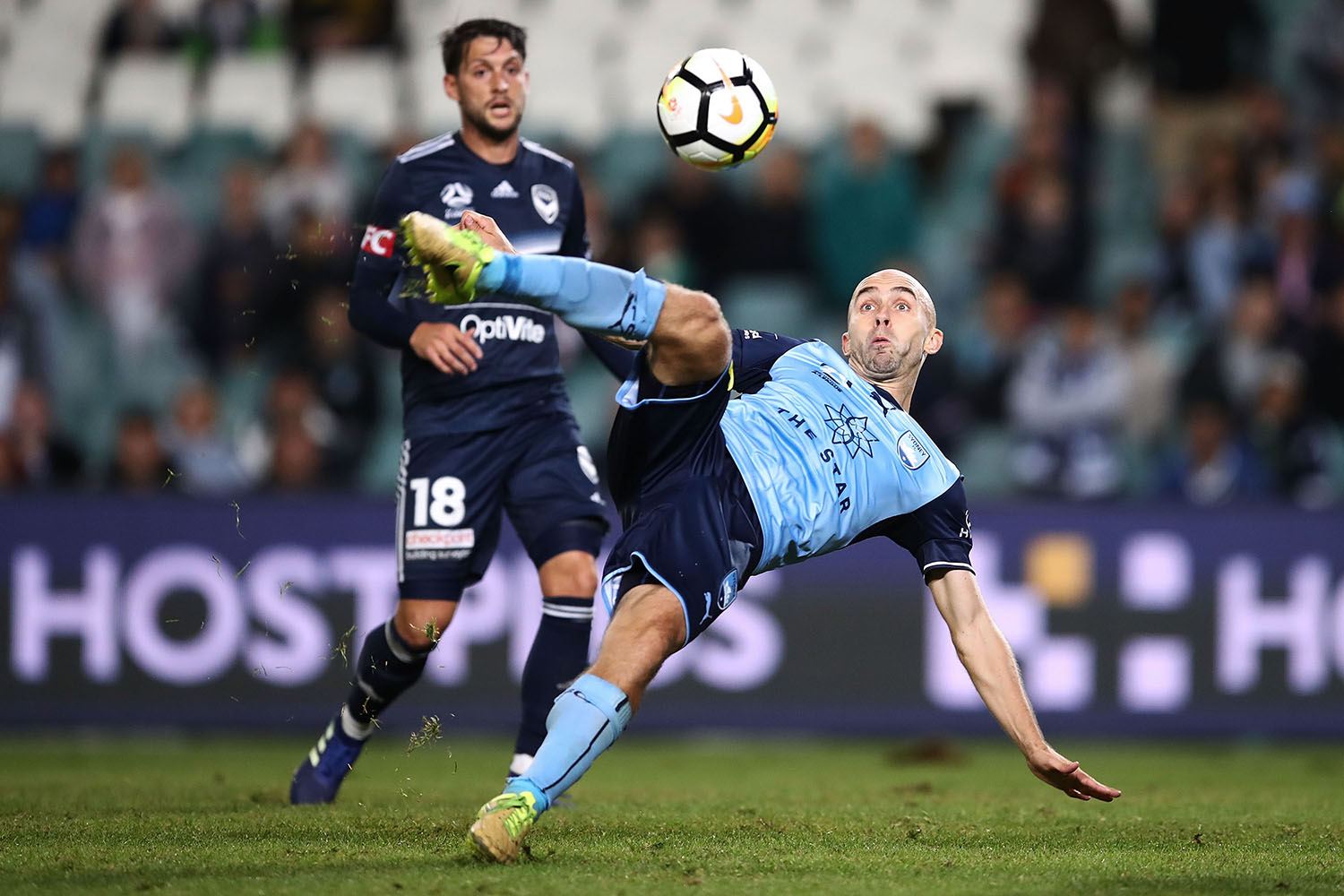 16’ FIRST SHOT IN ANGER GEORGE – Melbourne spray the ball out to their playmaker who gets himself just inside the box thumping a shot into the side netting.

20’ OFF THE POST BARBAROUSES – A ball is crossed over to Barbarouses on the edge of the box before he takes a touch and slices his shot to find the right-hand upright.

26’ DOWN TO HIS LEFT REDMAYNE – Valeri foils the official and almost brings Melbourne level with his hand but Redmayne has it covered producing a great reflex save.

33’ NEAR POST CHANCE BUIJS – A Wilkshire cross alludes everyone to find an advanced Buijs at the back post who tries to squeeze his shot in from an acute angle but Thomas saves and clears.

37’ LONG RANGE EFFORT BRILLANTE – Finding himself in acres of space, Brillante takes a touch before letting go from 30 yards out but his effort is straight at Thomas.

39’ ONE-ON-ONE MIERZEJEWSKI – Brosque creeps behind the Donachie to knick the ball and play Adrian in behind. The Alex Tobin medallist tries to chip the ball over Thomas but it’s deflected away for a corner.

57’ BUIJS OFF WITH INJURY – Graham Arnold is forced to replace the Dutchman as he strains his back chasing down a ball.

63’ SO CLOSE BRILLANTE – Ball is only half cleared by the away side and falls to Brillante who sets himself before unleashing a thunderous effort 25 yards out. Thomas just does enough, producing a last ditch save.

68’ LONG RANGE FROM ANTONIS – The former Sky Blue comes close after his shot from distance just goes over the bar.

73’ FREEKICK JUST OVER O’NEIL – O’Neil comes close as his 20 yard freekick comes agonisingly close to what would be an equaliser for the Sky Blues.

77’ HOW DID THAT NOT GO IN FOR BOBÔ? – A beautiful looping header from the golden boot winner looks destined for the top corner before Thomas pulls off a world class save.

90+3’ OFF THE POST FOR WARLAND – Another effort goes desperately close with the substitute centre-half’s volleyed effort tipping the crossbar. 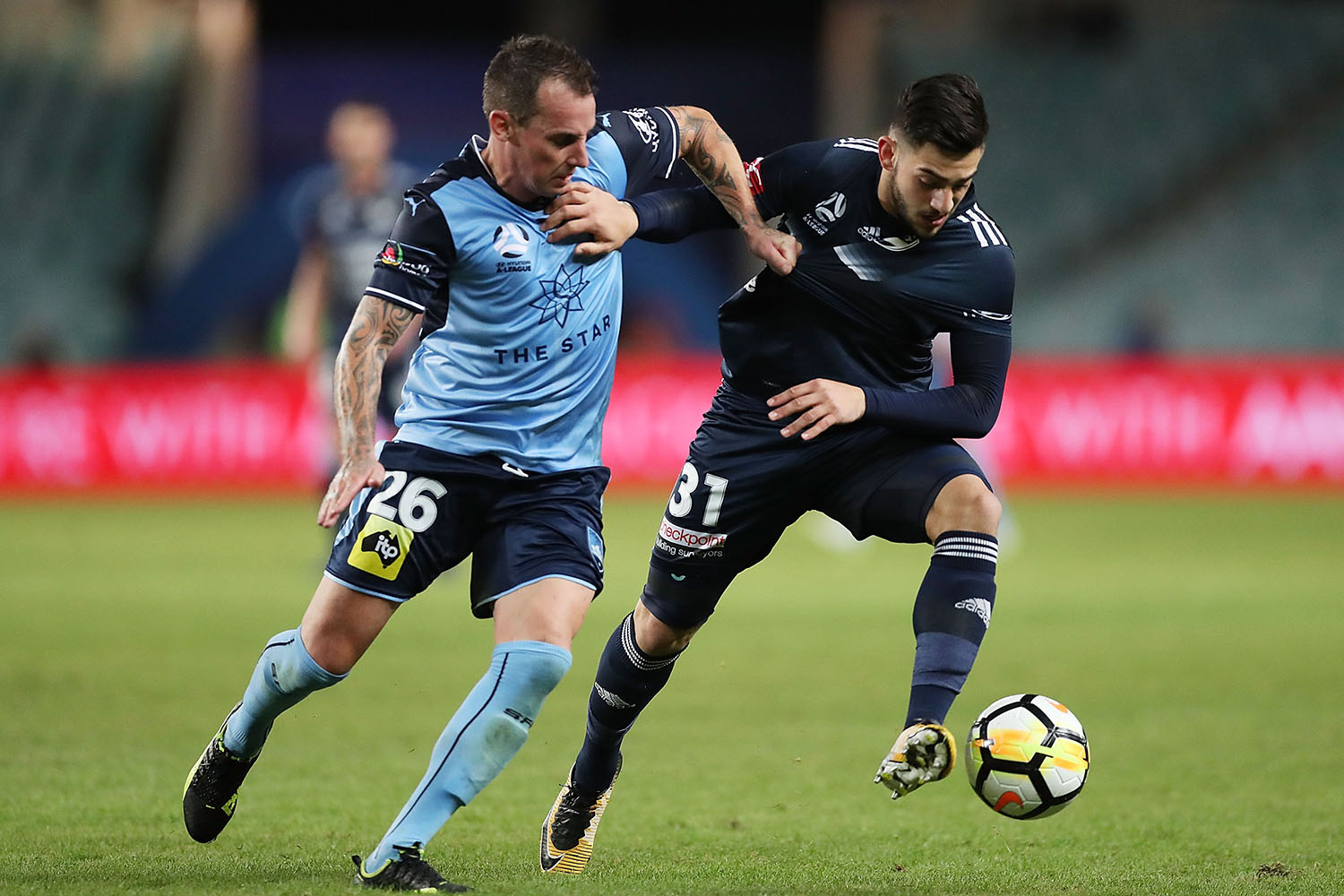 94’ SNAP SHOT BOBÔ – Carney slips a great ball across the edge of the box for the Brazilian as his thumping effort is just palmed away by Thomas.

95’ MIERZEJEWSKI WITH THE ACROBATICS – A back post cross finds Simon and is headed back across Adrian’s path with his audacious overhead attempt just being saved by Thomas.

110’ PENALTY SHOUT SIMON – The Wizard is seemingly dragged down as a freekick is swung in but the official and VAR rule wave it away. 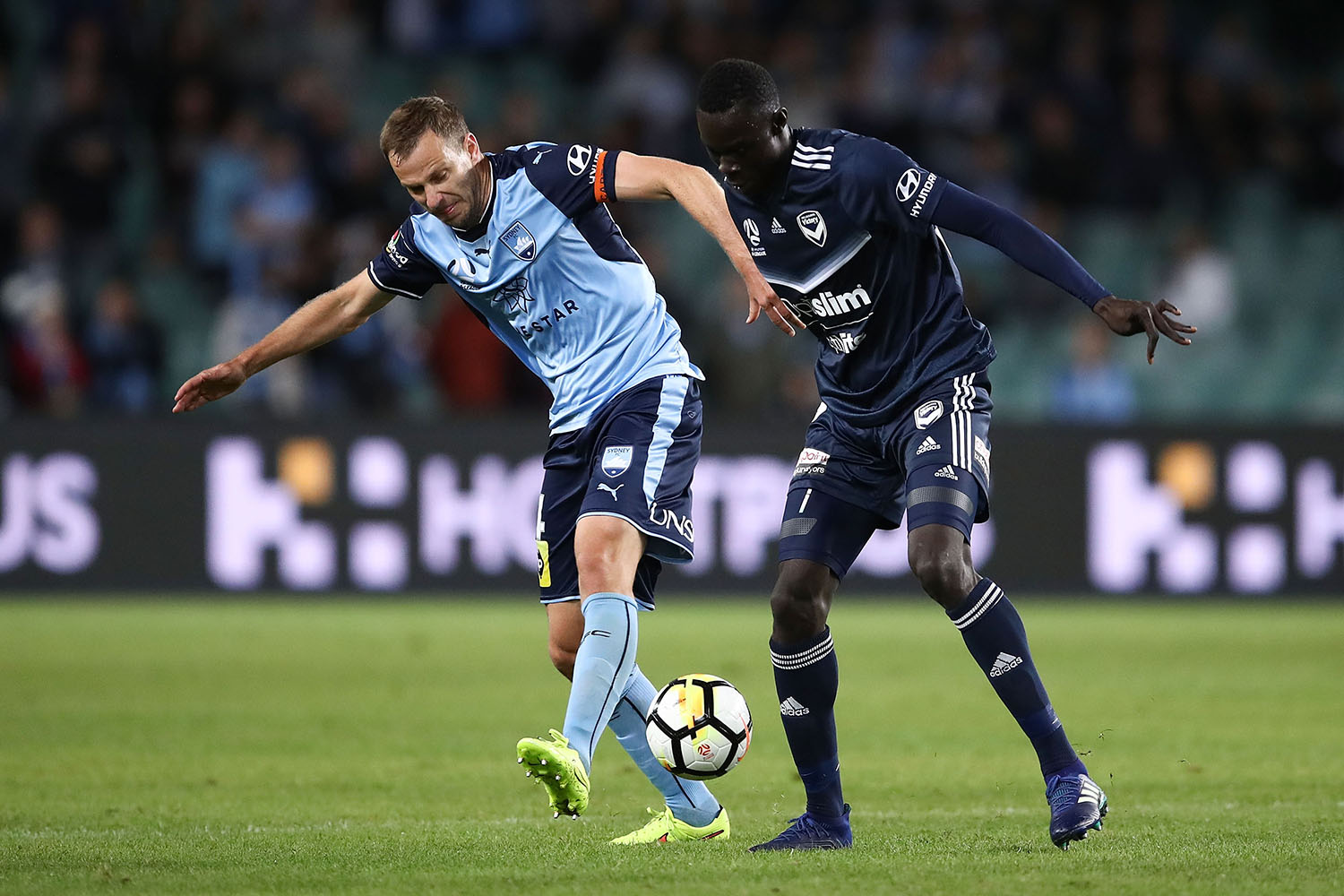