Sydney FC remain top of the Hyundai A-League ladder and are still the only undefeated team in the league following a 0-0 draw against 2nd placed Brisbane Roar at Allianz Stadium.

Sydney FC remain top of the Hyundai A-League ladder and are still the only undefeated team in the league following a 0-0 draw against 2nd placed Brisbane Roar at Allianz Stadium.

The Sky Blues cancelled out the Roar’s strike force, the top goalscorers in the division prior to this weekend’s games, allowing them not a single shot on target.

Sydney FC’s best chances came through strikes from Alex Brosque and Shane Smeltz but they were both foiled by Brisbane keeper Jamie Young. 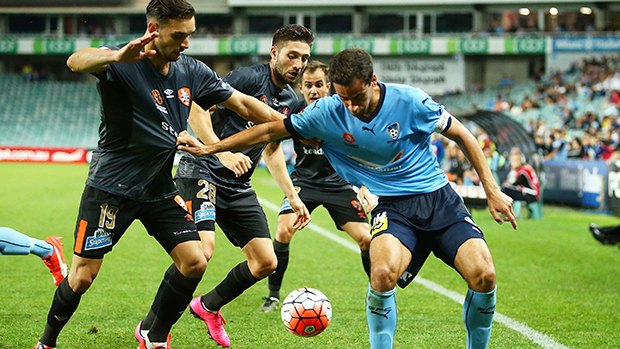 Graham Arnold: “I was worried today because there’s a bug that’s gone through our team, where played have been ill with gastro and it’s gone through 8 or 9 of them and I was worried that they wouldn’t get through the game. For the effort they put in and what they did on a heavy pitch, defensively we were outstanding. Brisbane didn’t have a shot on goal, I was happy with our defence.

“Defence wins Championships. If you look at all the teams in Europe that win titles they’ve all got the best defensive record.”

5’ SMELTZ CHANCE – Smeltz receives the ball from Brosque on the edge of the area, digs it out of his feet and fires in a right foot shot towards the bottom left hand corner but keeper Young is across to parry away.

63’ BROSQUE PENALTY CLAIM – Grant crosses a ball which is headed in the air by Faty towards goal. As the ball falls into the six yard both McKay and Stefanutto hesitate and Brosque looks to pounce but goalkeeper Young flattens him while trying to punch the ball.  Young gets the faintest of touches on the ball with his glove as penalty claims are waved away.

65’ BROSQUE CHANCE – Hingert loses the ball inside his own half to Brosque drives towards goal.  The Sydney FC captain drills a left foot shot along the floor but Young is down to save.

68’ GRANT BLOCKS SHOT – Broich chips a ball into Petratos just outside the Sydney FC penalty area, he cuts inside Grant but the full back recovers to block Petratos’ shot.

85’ GRANT SHOT OVER – Holosko runs at the defence and beats a couple of players before shooting.  The shot is blocked and falls to Grant outside the box to fire over.

Sydney FC Head Coach Graham Arnold made two changes to the side that won 3-1 at Central Coast Mariners on Saturday.  Milos Ninkovic made a return from a calf strain in place of Christopher Naumoff, who heads off to Olyroos duty next week, while Mickael Tavares came in for Milos Dimitrijevic who could have played through a slight groin strain but was rested as a precaution.