Sydney FC brought cheer to patients at the Sydney Children’s Hospital, Randwick on Wednesday as Jacques Faty and Mickael Tavares toured the wards.

Marc Janko’s match-worn jersey from the Sky Blues 4-2 victory over the Central Coast Mariners, in which he scored two goals, fetched $815 while the second most popular jersey was fellow striker Shane Smeltz’s which attracted a top bid of $355.

Following the presentation the players participated in a live game of snakes and ladders in the Starlight Room that was broadcast around the whole Hospital. 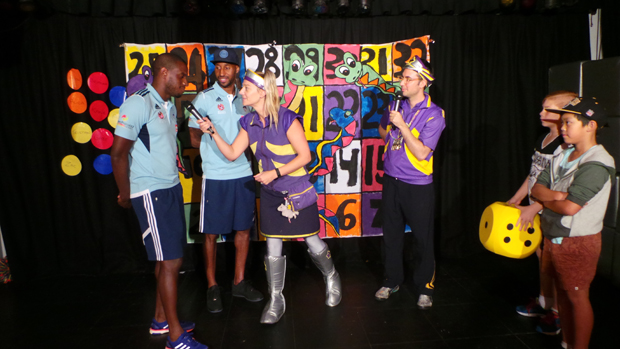 Tavares said it was great to be able to brighten the children’s days with their visit as he said it brought everything into perspective.

“I realise how lucky we are,” he said.

“It was great to bring our support to those at the Hospital. God bless them.”

Sydney FC would like to thank all their Members and fans who placed bids on Sydney Children’s Hospital Foundation charity third strips.

The Sky Blues take on Brisbane Roar at Allianz Stadium (kick of 5pm) on Sunday 15 March. Be there to see whether Marc Janko can set a new A-League record for goals scored in consecutive games. Purchase your tickets today or become a Member and ensure you don’t miss a moment of action this season.

Sydney FC’s next home game is against Brisbane Roar on Sunday 15th March at Allianz Stadium (kick off 5pm). Purchase tickets today or become a Member and ensure you don’t miss a moment of Hyundai A-League action by heading to www.ticketek.com.au/sydneyfc