While it reads one all on paper the score line could have been vastly different on Saturday in round one of the Hyundai A-League between Sydney FC and Melbourne City FC at Allianz Stadium.

The Sky Blues peppered City keeper Thomas Sorensen’s goal on countless occasions in an attacking frenzy throughout the match with the Dutch shot stopper pulling off spectacular save after save.

“The stats show we had seven shots to their one and that was their goal which was our mistake and we pretty much dominated the game,” Sydney FC Head Coach Graham Arnold said immediately after the match, unaware of the statistics.

However the true statistics, when finally revealed, painted an even better picture for the Sky Blues.

In total Sydney FC fired nine shots his way, with eight on target and one shot, also on target, blocked to leave Sydney FC finishing the match with a 100% shot accuracy.

In contrast City had only the one effort on target all match, their lone goal from a Sky Blues error, as Sydney FC enjoyed the greater share of possession over the 90 minutes. (51.2% to 48.8%).

“The only time they were dangerous was when we turned over cheap possession in the middle of the park and they hit us on the break,” continued Arnold.

“I wasn’t that worried about the defence, it was only the turnover in possession.” 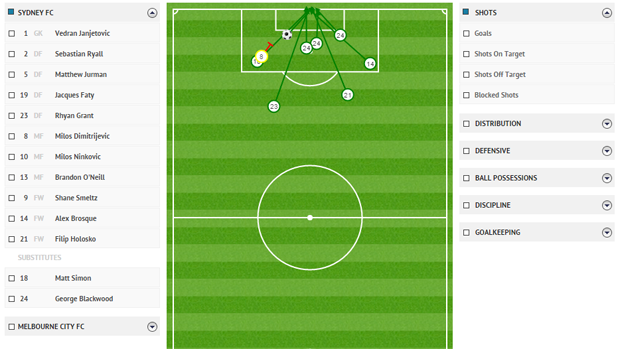 All nine of Sydney FC’s shots on target (green) against Melbourne City FC at Allianz Stadium in round one. The sole blocked shot (yellow circle) came from Milos Dimitrijevic in the 75th minute. George Blackwood had three shots on target late in the match while Filip Holosko, Alex Brosque and Rhyan Grant also saw shots saved. 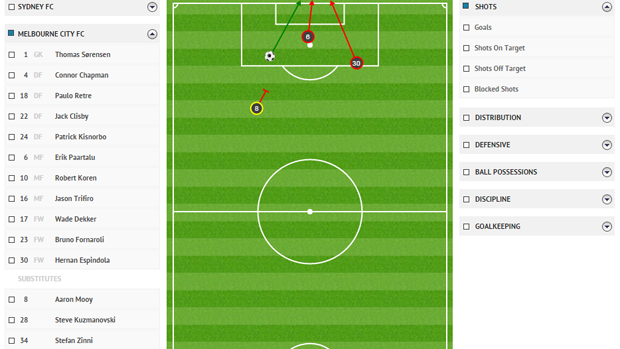 Melbourne City’s four efforts at goal with the single on target effort resulting in the opening goal of the match, from Wade Dekker in the 15th minute. Eric Paartalu’s effort rattled the crossbar while Espindola sliced his effort wide (red). Aaron Mooy’s shot was the sole off target effort blocked. (Red with yellow circle).

Sydney FC travel north to take on the Newcastle Jets at Hunter Stadium on Saturday 17 October (kick off 5:15pm). Catch the match live on Fox Sports 4, listen live on ABC Grandstand or follow @SydneyFC on Twitter for match updates.

Sydney FC Memberships are now on sale for the 2015/16 season. Click HERE  to become part of the Sky Blues family