A tenacity in attack and a dogged defence saw the Sky Blues claim the beyondblue Cup and Big Blue honours at Allianz Stadium on Saturday night.

The Sky Blues made more tackles than Melbourne, 21 to 17, and finished with a higher tackle completion rate of 76.2% compared to 70.6% to keep Melbourne at bay and ensure the Sky Blues’ unbeaten streak remained intact.

In total, the Sky Blues made 29 interceptions to stifle Melbourne’s attack, while proving dominant in the air by winning 51.1% of their aerial duels and 50% of their ground duels in a well-rounded defensive display.

Going forward it was the Sky Blues perseverance in attack that saw them come out on top courtesy of David Carney’s second half brace. 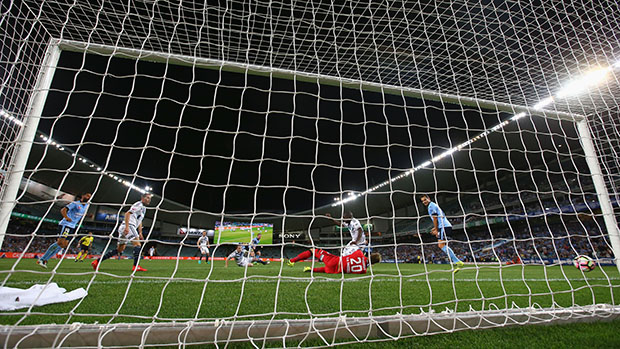 The Sky Blues forged more shots than Melbourne, 12 to 9, while firing seven of those efforts from outside the area compared to Melbourne’s two as the Sydney FC threatened Lawrence Thomas’ goal from every range, with Josh Brillante going particularly close from distance sending a wicked drive just wide of the upright in the first half.

Looking at the average position chart, the Sky Blues had the majority of play in Melbourne’s half with Rhyan Grant particularly advanced on the right flank and Milos Ninkovic and Alex Brosque working in tandem to press Melbourne’s backline.