Sky Blues Make It Three In A Row

Sydney FC has moved into second place on the Westfield W-League ladder after they defeated Adelaide United 2-0 in front of a bumper crowd Seymour Shaw on Sunday.

Sydney FC has moved into second place on the Westfield W-League ladder after they defeated Adelaide United 2-0 in front of a bumper crowd at Seymour Shaw on Sunday.

The Sky Blues dominated the first half and were duly rewarded after Remy Siemsen finished off a lovely move with a looping effort over Eliza Campbell just before half-time.

United created numerous chances of their own after the break, but were unable to capitalise in the end as Sydney doubled their lead six minutes from full-time.

The win sees Sydney make it three wins in a row, remaining in good stead as they travel to face the Newcastle Jets next week. 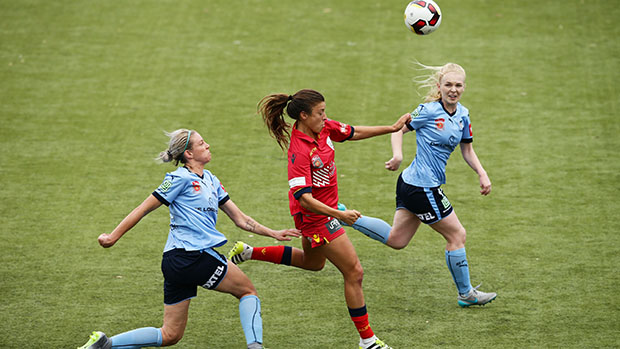 Head Coach Daniel Barrett: “I’m very happy with the win. I thought we controlled most part of the game. It would have been nice to have a couple of extra goals but I’m very happy with the three points. Remy has been outstanding. I know what depth we have, I’ve been very proud of Remy, Olivia Price, Natalie Tobin, Hannah Bacon, our younger players have really stood up. No Servet Uzunlar, no Caitlin Foord for the second half and no Kyah simon but to have our young ones step up the way they did, they’re making solid contributions, so I’m very happy and proud.”

42’ SIEMSEN GOAL – Beautiful build-up play between Price and Bolger releases Siemsen who executes a delightful chip over Campbell and into the back of the net.

84’ OWN GOAL – A Teresa Polias corner sees the ball inadvertently bundled over the line by Hodgson, allowing Sydney to double their lead. 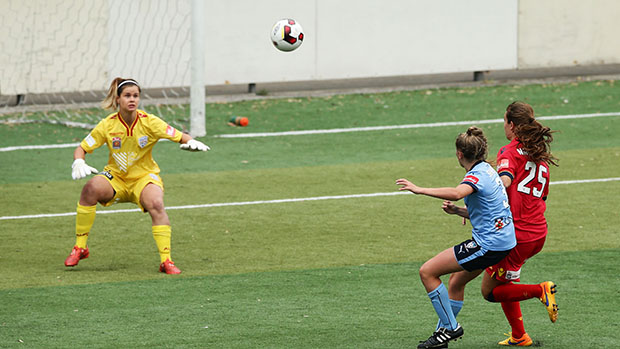 5’ FOORD CHANCE – A neat one-two sets up Foord with a long-range strike that curls away from the post.

12’ KHAMIS CHANCE – Foord lifts the ball into the path of Khamis, however her lobbed effort sails wide.

29’ BOLGER SHOT – Price sets up Bolger just outside the 18-yard area but her shot floats harmlessly over the bar.

37’ PRICE CHANCE – Price swings in a teasing ball that Adelaide can only clear out for a corner.

65’ SIEMSEN CHANCE – Tobin plays in Siemsen, but she was unable to get her shot off before an advancing Campbell came to collect the ball.

84’ KENNEDY CHANCE – A Polias corner sees Kennedy rise highest above the pack, but her ensuing header is saved.

Sydney FC’s Memberships are on sale now!  Click here to see the range of Membership options for the Westfield W-League 2016/17 season. PLUS catch a Hyundai A-League double header as part of your Membership at Central Coast Stadium on Sunday 8 January!