Sydney FC capped off their remarkable, record-breaking regular season in style defeating the Newcastle Jets 2-0 to smash the Hyundai A-League points record and lay claim to being the greatest team in Australian football history.

Sydney FC capped off their remarkable, record-breaking regular season in style defeating the Newcastle Jets 2-0 to smash the Hyundai A-League points record and lay claim to being the greatest team in Australian football history.

The win takes the Sky Blues to 66 points from a possible 81 this season with 20 wins to their name having dropped points in just seven games.

Second half goals to Milos Ninkovic and Alex Brosque sealed the points for the Sky Blues, leaving their ecstatic fans to celebrate their team’s triumphant and watch skipper Brosque raise the Premiers Plate.

It ends a dominant season that saw Graham Arnold’s men break the record for having the most number of clean sheets, greatest goal difference, most wins, and the biggest winning margin in Hyundai A-League history. 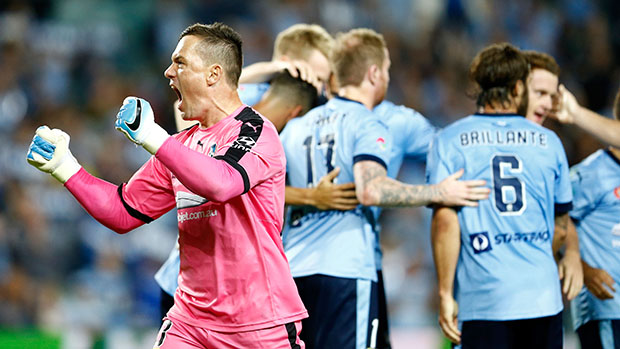 Graham Arnold: “It’s still hard to fathom 66 points out of 81, it’s crazy. It’s something that I believe, in my lifetime, I’ll never see again.

“Four weeks ago we won the trophy and everyone was waiting for us to take our foot off the pedal, but I think our performances improved.

“I don’t think you’ll see something like that again. This year we got 20 wins and it’s a remarkable feat that the players have done.

“Newcastle made it hard for us at times but I thought we played very well tonight. I said to the boys at half time that it was just about the execution and being a bit more relaxed in front of goal.

“At the end of the day it was a very dominant performance and a great way to finish the season off.

On Ninkovic: “We’ve got fantastic medical staff and they’ll get him ready.

“They (the team) are going out for dinner tonight as a group and they will be given tomorrow and Monday off, but we’re back on Tuesday, Wednesday, Thursday and on Friday we’ll have a game.”

56’ NINKOVIC GOAL – Holosko’s cutback falls right into the path of an unmarked Ninkovic who happily puts the ball into the back of the net. 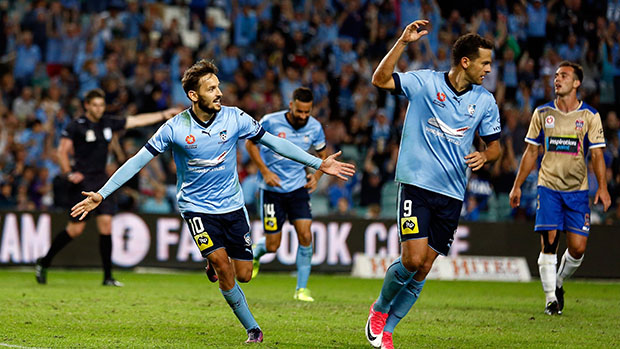 1’ HOLOSKO CHANCE – O’Neill chips a gorgeous ball through to Holosko inside the box, but his volley is saved by Duncan.

14’ NINKOVIC CHANCE – After some dazzling quick feet, Ninkovic plays a one-two with Bobô inside the box before Kantarovski blocks the ensuing shot.

33’ WILKINSON CHANCE – With two chances in quick succession, Wilkinson sees his shot blocked before his header can only find the woodwork.

40’ NINKOVIC CHANCE – Ninkovic glides into the penalty area but his cutback across goal is cleared before Bobô can pounce.

41’ NEWCASTLE PENALTY – Grant brings Hoole down inside the box and the referee awards the penalty.

42’ NABBOUT PENALTY MISS – Nabbout’s penalty is hit hard, wide and out for a goal kick.

70’ GRANT CHANCE – Grant collects the ball inside the box but his volley flies high and over the bar.

75’ NINKOVIC SUBSTITUTION – Ninkovic gingerly gets back on his feet before being substituted and taken back to the locker room for further assessment.

82’ BROSQUE CHANCE – Brosque dispossesses the last defender and is one-on-one with the goalkeeper before Mullen races back to kick the ball away.

Head Coach Graham Arnold made three changes to the side that drew 1-1 with the Wellington Phoenix last weekend. Joshua Brillante and Brandon O’Neill returned to the starting line-up after serving their one match suspension, while Milos Ninkovic took the field after completing a full recovery from the illness that kept him out of action last time out.