Lisa De Vanna, Alex Cisak and Emma Rolston spoke with Sydney FC fans, signed autographs and showcased some of their skills with a football.

“It’s always good getting out and about and meeting fans in local communities,” De Vanna said.

“It’s positive for us as players to meet the people who are coming to watch us every week, have a chat and a bit of a kick about to try and say thank you for the fantastic support.”

“Our fans really are like a 12th player on the pitch for us and Sydney’s fans are some of the best in the country,” she said. 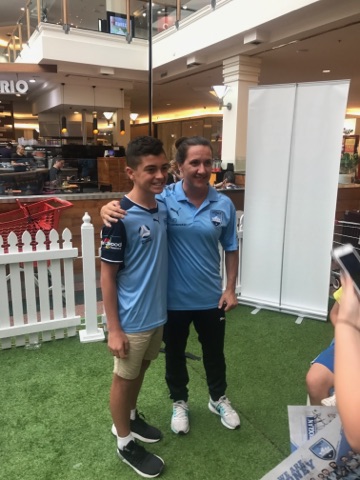 Kurt Johnson, General Manager at Hills Football said it was a great night for all the kids and fans in attendance.

“It was a week long event that we had and it was great to have the players in for an hour on Thursday night with the trophy,” he said.

“The kids loved shooting the ball at Alex [Cisak] and trying to score a goal against him, and Lisa [De Vanna] and Emma [Rolston] got involved as well teaching the players how to kick the ball properly.

“It was a great event and one that the kids really enjoyed.”

The players won’t stop there with further visits to local associations planned in the near future including the Sky Blues big Westfield W-League clash against Western Sydney Wanderers at Seymour Shaw on February 4th.