Joining the 2004 Invincible at Rebel Sports Bondi on Wednesday night in the lead up to the clash at ANZ Stadium was Sydney FC duo Sebastian Ryall and Jordy Buijs, who brushed shoulders with the former England central defender and discussed everything football with Fox Sports’ Mark Bosnich.

Ryall, Buijs and Campbell met fans of both the Gunners and Sky Blues, posing for photos and signing autographs, as the anticipation for July’s match was ramped up.

Sky Blues defender Sebastian Ryall said it was a great night out and said he was looking forward to July’s clash.

“It was a great experience meeting someone of Sol Campbell’s stature,” Ryall said.

“It’s always a pleasure to meet our fans and chat football.

“To have Arsenal coming to Sydney to play us is fantastic for football in this country, and for Sydney FC,” he continued.

“It’ll be a great test for us against one of the iconic clubs of England, and I’m really looking forward to taking part against some of the best players in the world at ANZ Stadium.” 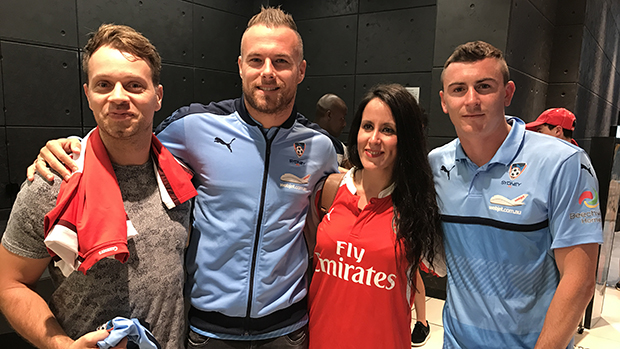 Spending the greater part of the past two months out through a hamstring injury, Ryall is on the road to recovery and set to return in the coming weeks with the Finals Series on the horizon.

“The leg is feeling good and I’m happy with how it’s responding to my increasing workload,” he said.

“Hopefully I’m back in the coming weeks and there to help the squad continue on their winning ways on the road to beating all the records before us and reaching the Grand Final.”

For more information about the Arsenal in Sydney Tour, visit www.arsenalinsydney.com.au or to get your Adult tickets from as little as $39 and family tickets from $99 visit Ticketek here.