Sydney FC have delivered the biggest ever winning margin in a Sydney Derby with four goals in a pulsating second half in front of the Hyundai A-League’s highest ever crowd.

Sydney FC have delivered the biggest ever winning margin in a Sydney Derby with four goals in a pulsating second half in front of the Hyundai A-League’s highest ever crowd.

Filip Holosko opened the scoring with a well taken goal before laying another on a plate for Bobô.  Brandon O’Neill put the game beyond doubt in the final ten minutes with a sublime free-kick, with club captain Alex Brosque adding a fourth late on.

Wanderers finished the game with ten men having had Anitz Borda sent off for a professional foul when bringing Brosque down who was clear on goal.

The Sky Blues have their first home game of the season next Saturday evening against the Central Coast Mariners.  Sydney FC are yet to concede a goal in four competitive fixtures so far this season.

Graham Arnold: “I don’t think it was a 4 nil game. The first half was an arm wrestle, a typical derby. It was physical but I thought that we controlled good parts of the first half. It was a bit messy at times, but that’s a derby. We spoke at half time about playing our football, getting the ball on the ground and playing with the quality players that we’ve got.

“We tried to move them side to side to try and open up spaces and I thought in the second half we did exceptionally well. I spoke to the boys yesterday about having to disappoint four or five players, leaving them on the bench. If you look at our bench I had Dimitrijevic, our player of the year from two years ago, and Seb Ryall and Brosque, Matt Simon and Vedran who’s a number one goalkeeper, so we’ve got depth.

“We’re not getting carried away, we’ve had a great start to the season with the FFA Cup and tonight, but we’ve got Central Coast Mariners next week at home. We hope that we get a big crowd there with plenty of Sky Blues supporters.“

51’ HOLOSKO GOAL – Carney makes a left wing run and crosses, Bobô nudges the ball past the defender for Holosko to run onto and slam beyond Redmayne.

54’ BOBÔ GOAL – Zullo crosses to the back post where Holosko controls on his chest and volleys the ball back across goal for Bobô slot home unmarked.

84’ O’NEILL GOAL – From the free kick on the edge of the box resulting from the Borda sending off, O’Neill curls a fantastic free kick into the Wanderers top corner.

89’ BROSQUE GOAL – Matt Simon cuts the ball back to Bobô in the area, the Brazilian sees his first time shot saved but Brosque is on hand to tap in the rebound. 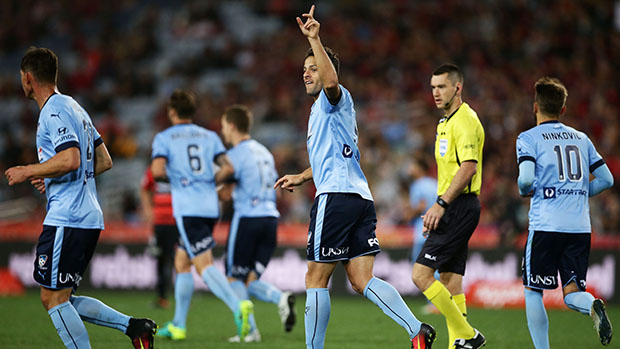 16’ GRANT CHANCE – Sydney FC break on a counter attack with Ninkovic giving the ball to Holosko on the left wing.  The Slovakian runs at the Wanderers defence and finds Rhyan Grant wide on the right with space to shoot, but the shot is tame and Redmayne is down to smother.

18’ HOLOSKO CHANCE – Bobô lifts the ball into the path of Holosko who brings it down and runs direct at goal to open up a shooting chance but shoots wide of the target.

24’ HOLOSKO CHANCE – Zullo does brilliantly to win the ball which falls to Bobô.  The Brazilian plays a fantastic ball through to Holosko but his touch takes him just wide and his ball into the box is locked and smothered by the keeper.

30’ CORNTHWAITE TACKLE – A lunging studs up tackle from Cornthwaite on Bobô infuriates the Sky Blues players and a melee ensues with boys sets of players involved. The result sees Cornthwaite booked for the challenge and Carney and Neville booked for the melee.

44’ BULUT SHOT – Wanderers break and the balls falls to Bulut but his low effort is just wide.

45’+2” VUKOVIC SAVE – Great stop from Vukovic as he gets down low to deny Bulut from close range.

66’ BULUT HEADER – Martinez turns inside the box and floats the ball to back post where Bulut heads straight at Vukovic.

72’ VUKOVIC SAVE – A Nichols flick is deflected and falls back into the path of the striker but Vukovic is out quickly to block with his body.

76’ GRANT HITS THE BAR – A cross field pass is taken down on his chest by Rhyan Grant, who allows the ball to bounce before crashing a shot off the bar.

84’ BORDA SENT OFF – Sydney FC break through Ninkovic who plays a perfect ball to put Brosque clear on goal.  Borda brings him down in a clear goalscoring opportunity and is sent off.

Head Coach Graham Arnold made one change to the side which defeated Blacktown City 3-0 in the FFA Cup quarter-finals two weeks ago with Seb Ryall switching with Matthew Jurman who came in to captain the side and Ryall heading to the bench.