Sydney FC conceded three goals in stifling conditions at Central Coast Stadium on Sunday as the Brisbane Roar earned the three points in the latest chapter between two heavyweights of the Westfield W-League.

Sydney FC conceded three goals in stifling conditions at Central Coast Stadium on Sunday as the Brisbane Roar earned the three points in the latest chapter between two heavyweights of the Westfield W-League.

After a bright opening for the Sky Blues, Tameka Butt put the roar in front midway through the first half before an inadvertent diversion by Alanna Kennedy saw the Roar double their advantage with an own goal as the half drew to a close.

The Sky Blues came out firing in the second half as Jasmyne Spencer rattled the woodwork with a powerful header however, a spirited second half display from the Sky Blues wasn’t enough however as Clare Polkinghorne made sure of the points as she headed home a free kick at the far post with just over 25 minutes left to play.

Sydney FC are next in action on Sunday 27 December in the round’s televised game as they face the Melbourne Victory at AAMI Park (kick off 2pm). 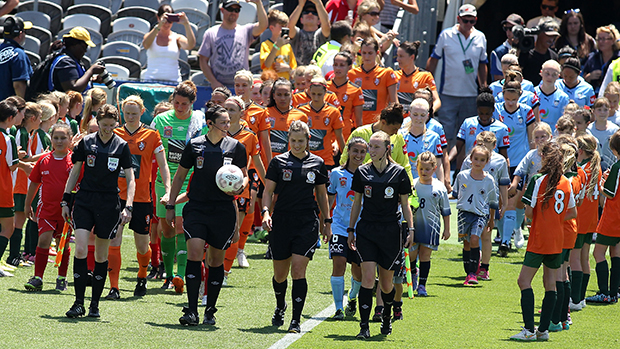 19’ BUTT GOAL – Tameka Butt gets on the end of a slide rule ball from Gielnik in the area to calmly sidefoot beyond Betos in goal.

38’ KENNEDY OWN GOAL – Marzano looks to loft a ball into the area and Alanna Kennedy inadvertently directs the ball into her own net.

63’ POLKINGHORNE GOAL – A Roar free kick is floated towards the far post where Clare Polkinghorne rises highest to nod the ball into the back of the net. 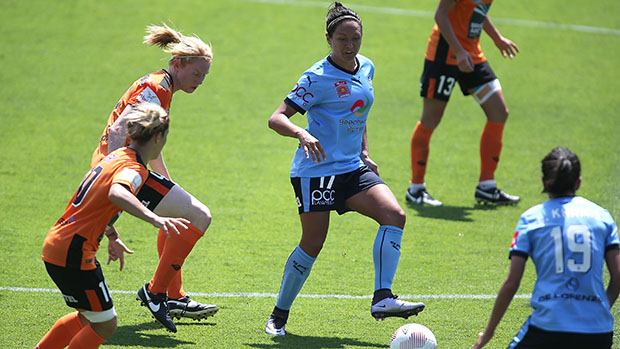 2’ HARRISON CLEARANCE – Gielnik curls a ball in to the area with Butt lurking at the far post, however Amy Harrison produces a smart clearance to avert the danger.

13’ FRANCO CHANCE – Kyah Simon lifts a ball into the path of Franco in the area, however he volley from an acute angle is parried at the near post.

21’ POLIAS SHOT – Jasmyne Spencer lays the ball into the path of Polias and the Sky Blues captain charges on to the ball before unleashing from distance into the keeper’s arms.

31’ KENNEDY FREE KICK JUST WIDE – Alanna Kennedy whips a wicked free kick just wide of the post with the keeper beaten from outside the area.

41’ BOLGER SHOT – Neat interplay on the edge of the area sees the ball fall to Bolger inside the box, however her close range effort is hit straight at the keeper and is saved.

61’ IBINI SHOT – A sweeping long ball from Alanna Kennedy finds Ibini with space to move in the final third. The youngster carries it forward and shoots but it sails wide.

64’ SPENCER HITS THE BAR – Kyah Simon produces some neat footwork to get to the byline and cross. She finds Jasmyne Spencer leaping highest but the American’s header cannons off the bar and is cleared.

80’ GORRY SHOT – Katrina Gorry charges forward to the edge of the box before unleashing at goal, however it’s comfortable for Betos and she gathers. 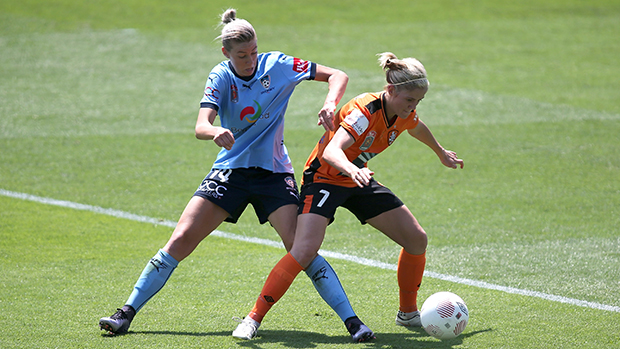 Sydney FC Head Coach Dan Barrett made two changes to the starting side that defeated the Perth Glory away from home. Ellyse Perry was absent on cricket duties, with Teigen Allen stepping in to her role, while Sunny Franco was promoted to the starting 11 in place of Princess Ibini as Hannah Bacon returned to the bench.