Vukovic and Grant have been integral to the Sky Blues record breaking season, with four points separating them from the Premiers Plate with five matches remaining, and the pair will both be eligible to make their senior national team debuts against Iraq and United Arab Emirates (UAE) this month.

The Sky Blues duo boast impressive season stats, with Vukovic having played every minute of every match keeping 12 clean sheets, while Grant has featured in 21 of the Sky Blues 22 games, scoring two goals from fullback.

The pair will form part of a 30 man squad selected by Postecoglou and are eager to get involved with the national setup.

“I’m really excited to have been named in the national team squad for the first time,” Grant said.

“I’m pretty surprised to get the call up, I never thought I’d receive it, but I’m extremely honoured and if I get the chance to represent my country it will be one of the proudest moments in my career.”

“It’s really pleasing to have your club form recognised by the national team,” Vukovic continued.

“I’m humbled to be selected, I know the challenge ahead of me to secure a place, and I’m eager to get into camp and prove my worth.” 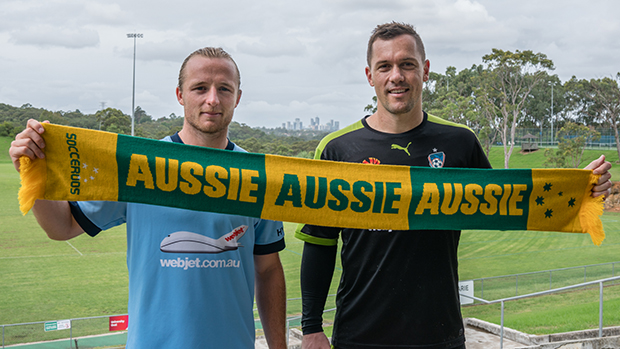 Sydney FC Head Coach Graham Arnold praised the pair for their form and congratulated them on their selection.

“Danny and Rhyan have had a standout season for us to date and their selection is well deserved,” Arnold said.

“The national team is a big step up and it will only further improve the boys to be exposed to that kind of environment.

“We are extremely proud of both players and as a club we all enjoy in their individual success knowing that the team has had a big role to play in their selection.”

Sydney FC are next in action at home against the Central Coast Mariners on Friday night (kick off 7:50pm). Be at Allianz Stadium to back your Sky Blues on their Premiers Plate tilt.