Sydney FC goalkeeper Thomas Heward-Belle was the hero of the evening saving two penalties to help the young Sky Blues claim a 2-1 win against APIA Leichhardt Tigers at Lambert Park.

Sean Symons had APIA in pole position at halftime after he opened the scoring thirty minutes in.

However, second half strikes to Charles Lokolingoy and Brendan Curtis put the home side in the lead,  while Heward-Belle’s saves from the spot – including one in injury time – helped Robbie Stanton’s side to a hard earned three points.

APIA’s attacking intent was obvious from the outset, and Symons tested the Sydney FC backline after only a few minutes when he pushed off a defender and dragged a low shot across the face of the goal.

Symons proved a constant threat during the opening exchanges, flicking a header wide of the post shortly before Tasuka Sekiya slipped clear of his marker to open up the goal for a shot which was deflected away for a corner.

Having dominated the first half hour of the match, it was little surprise when APIA took the lead in the 29th minute, with Symons rising in the box to meet Corey Bizco’s cross and head the ball inside the far post.

APIA were gifted an opportunity to double their lead five minutes later when the referee awarded a penalty after spotting a foul on Symons, but Thomas Heward-Belle made a remarkable double save to deny Matthew West once from the spot, and again from the rebound.

APIA refused to let up after the halftime break as they searched for a second to make their lead more secure, and Adrian Vlastelica might have done just that when he headed on a deflected free kick from almost point-blank range. However, Heward-Belle was again on hand to keep Sydney FC within reach of their opponents.

Adrian Ucchino rattled the woodwork with a free kick on the hour mark, shortly before Lokolingoy equalised for the hosts. The mercurial striker made the most of a rare chance to level for a resolute Sydney FC side with a calm finish under Luke Turnbull.

Just five minutes later, Sydney FC completed their comeback, with Brendan Curtis heading on an in-swinging cross from deep on the left flank to put his side into an unlikely lead.

APIA threw on experienced campaigner Franco Parisi and Jordan Murray as they suddenly found themselves on the back foot, but it was Joshua Symons who should have equalised with less than ten minutes to play. Symons rose unmarked to send a header high over the bar from Sean Symons’ free kick.

APIA were given a final chance to snatch an equaliser as the clock ticked over into injury time, with the referee again spotting a push in the box and pointing to the spot. Facing his second penalty of the night, Heward-Belle dived to his left to keep out Murray’s low shot before clearing the resulting corner to loud cheers from the stand. 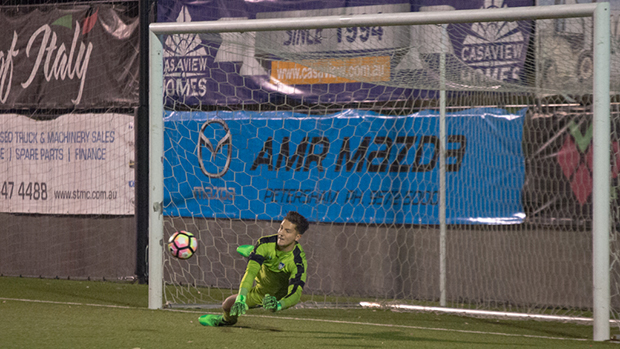 “We started slow and didn’t stand up enough,” he said.

“We’re a young side but we’re playing in a men’s competition, so that’s the level we have to be at. We looked at a few things at half time and we were brave in the second, and I think we deserved it in the end.

“APIA is a really good, competitive team. I think they’re good enough to win the competition, really. Danial’s got them playing really well, and I wish them the best of luck in the Waratah Cup next week.”

A defeated Danial Cummins rued his side’s second half collapse.

“I thought our first 45 minutes were really good,” he said.

“If we’d scored that penalty to make it 2-0, it could’ve been a very different story, but we didn’t turn up in the second half.

“We knew Robbie was going to change things, and full credit to him and his players – they’re a better side than where they sit on the ladder. We know what we have to do, and with five matches to go it makes it really hard for us now.”

There will be a weekend off for all clubs but the Tigers will be taking part in the 2017 Waratah Cup Final when they face Hakoah Sydney City East at Lambert Park on Sunday July 9th.