Sydney FC’s outstanding season has been honoured with the Premiers dominating the Professional Footballers Australia (PFA) 2016/17 A-League Team of the Season.

Voted on by all of the PFA’s A-League based members, eight Sky Blues were selected in the players’ team with their Grand Final opponents Melbourne Victory also featuring heavily with three players.

Having recorded the most amount of votes, Sydney FC’s Danny Vukovic co-captain’s the side with Alex Brosque, who was selected amongst the substitutes, with Graham Arnold’s stellar work with the record breaking Premiers seeing him named as Coach.

Proudly supported by PFA Major Partner ​ LUCRF Super ​ and ​Traveller’s Choice ​, the 2016/17 PFA A-League Team of the Season is as follows: 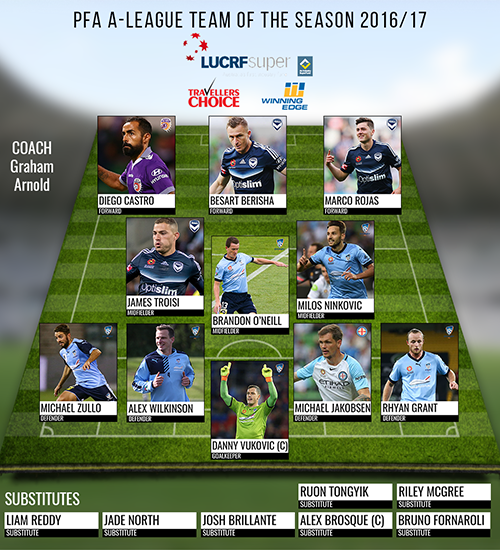 Having racked up a record number of clean sheets for the regular season, Vukovic said he was delighted to be named as co-captain.

“It is an honour to be selected in the team and even more so as captain,” said Vukovic.

“Your fellow players know what you have been through and their respect means you have had a good season; that is why these awards mean so much to players.”

Sky Blues captain Brosque said he was honoured to be named in the team for the second time.

“I’m very proud to be selected as co-captain alongside Danny,” said Brosque.

“The recognition of the players you face week-in-week-out is something that is special to all players.

“It has been a privilege to play with the group of players we have at the club and it is because of them that I have been selected in the PFA A-League Team of the Season.”

PFA Chief Executive John Didulica paid tribute to all of those selected in the players’ team.

“On behalf of our members I would like congratulate all those selected in the team of the season,” said Didulica.

“With 93 goals, 55 assists and 59 clean sheets between them, the 2016/17 PFA A-League Team of the Season highlights the on-pitch quality of the competition.

“The decision to appoint co-captains varies from what has been done in the past, but it was decided that it was apt to acknowledge Danny as having received the most amount of votes whilst acknowledging the remarkable leadership of Alex Brosque in Sydney FC’s record breaking season.

“In addition the selection of two Under 20 players, in Riley and Ruon, is recognition of the importance of the nation’s most talented young players playing regularly at a young age and puts the squad size in line with the major leagues around the world.”

Sydney FC will contest the Hyundai A-League Grand Final at Allianz Stadium on Sunday 7 May (kick off 5:00pm)!! Click here for all your important ticketing information.