A determined Sky Blues effort over 90 minutes wasn’t enough as the Western Sydney Wanderers claimed the points in a 4-3 #SydneyDerby thriller at Lambert Park, Leichhardt on Monday night.

A lone second half strike to Tariq Maia sealed the points for the Western Sydney side as the two teams contested an end to end, thrilling first half that ended 3-3 before a tense second half saw the net bulge only once more.

The two sides played out a tense opening five minutes before the Sky Blues got their name on the scoresheet first as George Blackwood leaped highest off a William Mutch cross to head the home side into the lead.

Juan Zapata saw a curling effort destined for the top corner saved, before Henry Davies restored parity for Western Sydney, sweeping home from a cutback inside the area with 15 minutes played.

The end to end first half continued with Blackwood and Mutch continuing to look lively, before Charles Lokolingoy volley home the Sky Blues second to re-take the lead, following some fine interplay between Riley Woodcock and Mutch.

Seven minutes later and the Wanderers were awarded a penalty as Timotheou fouled in the area on the break, and Mario Shabow coolly converted into the bottom corner from the spot for 2-2.

Four minutes passed before another penalty was awarded to the team from the West, Riley Woodcock the perpetrator of the foul this time, as Shabow again converted from 12 yards to put Western Sydney in the lead. 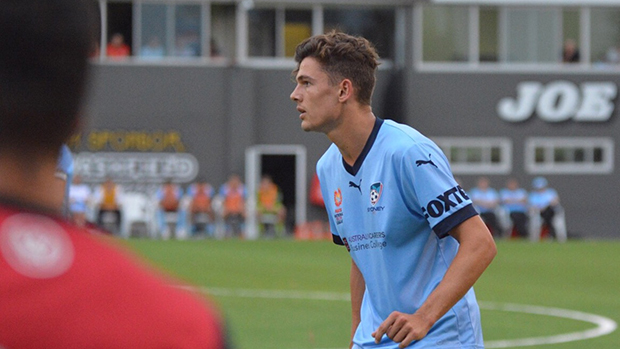 With time ticking down towards half time, Charles Lokolingoy grabbed the equaliser in the 42nd minute as his barnstorming run took him into the penalty area where he calmly sidefooted beyond Suman in goals to send the sides in level at the break.

The Sky Blues came out the brighter of the two sides in the second half, with Zapata, Lokolingoy and Blackwood all seeing efforts denied before Tariq Maia swept home the fourth goal in spectacular fashion from outside the area.

Pressing for an equaliser the Sky Blues stepped up a gear but were denied by the post and a stubborn Wanderers defensive line as chance after chance was blocked, with the full time whistle bringing an end to a thrilling encounter.

The Sky Blues return to NYL action away to the FFA Centre of Excellence on Saturday 7 January (kick off 4pm). Follow @SydneyFC on Twitter for match updates.