Sydney FC’s PlayStation 4 NPL 2 NSW Mens side moved back to the top of ladder, on goal difference, with a slick 4-1 win over the Central Coast Mariners at Lambert Park, Leichhardt on Saturday night.

In typical style the Sky Blues opened the proceedings at a good tempo and soon had the Mariners on the back foot with early forward pressure and dominant ball possession.

It only took 11 minutes before Sydney FC were rewarded for their dominance when Daniel Maskin dropped the shoulder and cut into the penalty area only to be brought down in the box, with the referee having no hesitation in pointing to the spot for a penalty.

Nicola Kuleski stepped up to take it and his low shot was saved by the Mariners keeper however he was deemed to have moved off his line too early and a retake was ordered. Kuleski made no mistake with the second attempt and Sydney FC led 1-0 in the 12th minute.

The Sky Blues continued to control the game as they moved the Mariners across the pitch with quick ball movement and penetrating runs between the lines.

Just before half time Sydney FC increased their advantage as Kuleski dribbled forward and then released Chris Zuvela into the area. The stand in skipper took the ball in his stride and from a slight angle rifled his shot across the goal and inside the back post and it was 2-0 in the 44th minute.

In the sheds, Head Coach Rob Stanton praised his players for their first half performance but reminded them that they had surrendered two goal leads in previous games. He told the team to remain focused and tactically disciplined in order to get the result. 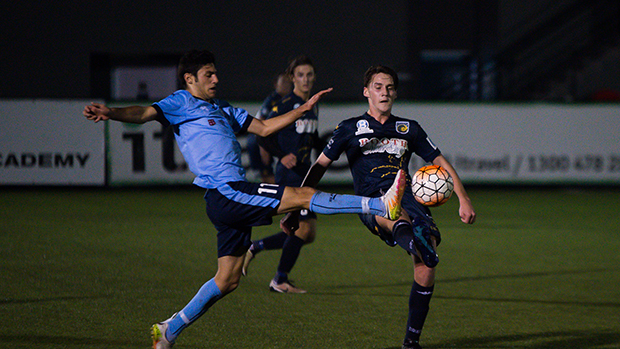 The second half started the same as the first half with Maskin again breaking through to be one on one with the keeper. His final touch to round the advancing custodian saw the ball nudged a little too far for him to regather but William Mutch who was in support had his effort saved off the line by a desperate tackle.

The Mariners gave themselves a glimmer of hope when Hyundai A-League player Trent Buhagiar bagged a goal after 62 minutes but a deadly ten minute spell by 17 year old John Iredale saw him score his first goals in the senior grade with a quick fire brace.

Off the bench Iredale made it 3-1 with a great volley after George Timotheou headed on the assist and then he finished off a delightful end to end move by the Sky Blues with a drilled shot into the bottom corner to make it 4-1 and shut out the game.

Sydney FC could have extended the margin as Cristian Gonzalez watched his free kick hit the base of the post and then Chris Arditti blasted a close range shot over the bar with the goal at his mercy.

In the end it was a well deserved win for Sydney FC as they moved back to the top of the competition ladder with a plus eight goal difference advantage over the Western Sydney Wanderers.

With the Under 18’s winning 3-1 along with the Under 20’s 4-0 win the clean sweep extended the lead in the Club Championship table to twenty points.

Next Saturday, Sydney FC face another Mariners outfit in North Shore Mariners at Northbridge Oval on Sunday, 14th August with the 1st grade kicking off at 3.00pm.