Sydney FC are on course to beat the Hyundai A-League record for points in a season following an entertaining 1-1 draw in Wellington on Saturday evening.

Sydney FC are on course to beat the Hyundai A-League record for points in a season following an entertaining 1-1 draw in Wellington on Saturday evening.

Following a tense first half that ended scoreless the chances arrived aplenty in the second half as the game opened up in an end to end affair.

Bobô’s strike from the penalty spot, awarded following the first ever VAR decision, seemed destined to earn the Sky Blues all three points, however Michael McGlinchey’s deft header in stoppage time ensured the points were shared in the penultimate round of the season.

Sydney FC return to Allianz Stadium on Saturday 15 April (kick off 5:35pm) to face the Newcastle Jets in a family fun day out, where Head Coach Graham Arnold’s squad will be presented with the Hyundai A-League 2016/17 Premiers Plate. 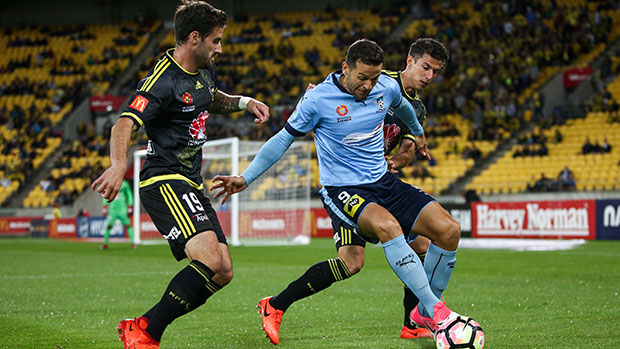 72’ BOBÔ PENALTY – Brazilian marquee Bobô notches his 15th goal of the season from the penalty spot, sending Lewis Italiano the wrong way and burying the ball into the back of the net from 12 yards.

90+3’ MCGLINCHEY HEADER – Kosta Barbarouses’ cross is flicked into the path of McGlinchey who steers a deft header beyond Vukovic to equalise.

10’ BROSQUE CHANCE – Phoenix keeper Lewis Italiano races out of his area to attempt to head a ball clear, he miscues the header allowing Brosque to run onto the ball and fire at goal, however the keeper tracks back to smother the effort.

34’ BONEVACIA CHANCE – Roy Krishna weaves his way towards the byline on the right before cutting across the box to Bonevacia who hooks his effort just wide of the near post.

45’ KRISHNA SHOT – Roy Krishna breaks down the left flank before cutting into the box and firing at goal however Danny Vukovic is equal to the task and parries the effort clear.

48’ BOBÔ HEADER – Michael Zullo crosses and finds Bobô at the far post but the Brazilian’s header lacks power and is saved.

51’ BROSQUE SHOT – Filip Holosko releases Brosque into space on the edge of the area however the Captain drags his shot wide of the near post.

52’ BARBAROUSES VOLLEY – Neat interplay outside the Sky Blues area by the Phoenix ends with Barbarouses volleying at goal however Danny Vukovic is equal to the effort to save.

56’ GRANT EFFORT – Alex Brosque crosses back across goal to Rhyan Grant who controls and volleys but Lewis Italiano saves.

64’ BOBÔ HEADER – Bernie Ibini crosses to Bobô in the area who powers a header at goal but Italiano palms it over.

66’ GRANT HEADER – Aaron Calver hooks a neat cross into the path of Grant however he flicks his header over the bar.

71’ VAR AWARDS A PENALTY – A Sky Blues corner looks to be handled in the box by Marco Rossi however Shaun Evans waves away penalty appeals before the VAR overturns the decision and awards a spotkick.

78’ BROSQUE HITS THE BAR – The Sky Blues’ Captain latches onto a flick on off a corner however he steers his header into the bar from close range. 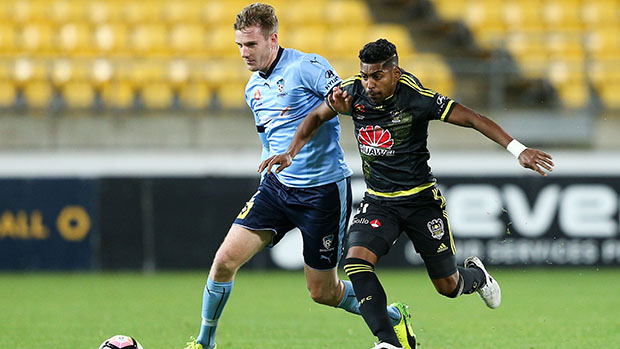 Head Coach Graham Arnold made a number of changes to the squad, as Aaron Calver came in at right back with Rhyan Grant joining Milos Dimitrijevic in the centre of midfield to cover the suspended O’Neill and Brillante. Alex Brosque shifted into Milos Ninkovic’s role, with the Serbian absent through illness, as David Carney started on the left wing. Foxtel National Youth League star Nicola Kuleski assumed a role on the Sydney FC bench.