Sydney FC have continued their Hyundai A-League preparations with a number of players gaining their first 60 minutes of football this pre-season.

The Sky Blues were given a good workout by the Macarthur Rams in their second fixture since returning to training, helping the squad gain important match fitness and valuable time on the pitch.

Some of Sydney FC’s younger players were also given their chance to impress in the game while key first team stars watched on from the stands.

Macarthur eventually ran out winners as the Sky Blues were denied by some great work from the Rams keeper on numerous occasions.

The only goal came in the 48th minute with Mason Versi capitalising on one of the Rams’ few chances.

Rhyan Grant: “It was good to get my first 60 minutes of football under the belt this season.  It’s an important time of year to gain match fitness.

“We’re being pushed extremely hard in training and putting in a lot of hours at the moment.

“The game time we are getting right now and the hard work will only make us stronger in the latter stages of the season.” 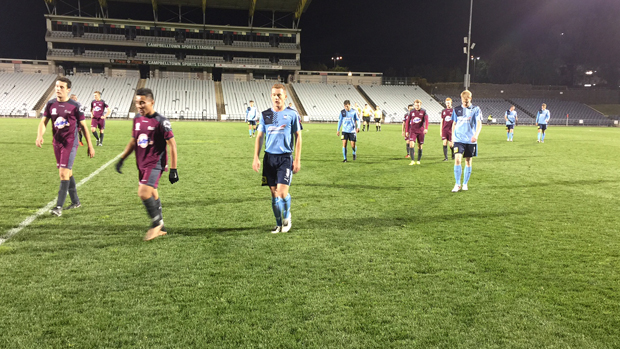 48’ VERSI GOAL – A swinging right wing cross is met with a volley from Versi at the back post, who puts the ball past Vukovic.

5’ SIMON CHANCE – Fantastic flick from David Carney puts Matt Simon through on goal but the ball is cleared by the Macarthur defence.

20’ BLACKWOOD CHANCE – Quick interchange of passes outside the box leads to a powerful shot by George Blackwood which goes just wide.

22’ BLACKWOOD CHANCE – A driving run from Carney sets up Blackwood on the right wing with a shot from an acute angle but the keeper saves.

34’ BLACKWOOD CHANCE – Cross from William Mutch is knocked down by Simon to Blackwood who forces the keeper to push the ball wide of the post.

41’ GRANT TACKLE – Through ball from the Rams midfield is cut off by a last ditch effort from Rhyan Grant as he knocks the ball out for a corner.

45’ SIMON CHANCE – A weak pass back is latched onto by Simon before the keeper smothers the ball, denying Simon the chance to shoot.

59’ O’NEILL CHANCE – A crunching tackle on Holosko leads to a free kick from O’Neil which goes inches wide of the post.

60’ SIMON CHANCE – Another cross into the box from Carney is met by Matt Simon who heads over the bar from close range.

67’ HOLOSKO CHANCE – Matt Simon breaks past two defenders before putting Holosko through on goal, but he sprays the shot just wide of the post.

71’ ZUVELA CHANCE – Scrappy play in the box as the ball falls to Zuvela who forces the Rams keeper into an athletic save.

75’ HOLOSKO CHANCE – Corner is turned away by the Rams defence and falls to Holosko who meets it with a volley but fires it over the bar.

79’ FLOTTMAN CHANCE – A Spyrakis corner is met by a towering header from Flottman but he misfires wide of the post.