Sky Blues Coach A Part Of The Family

Sydney FC endorsed Coach Pat Palumbo says he loves being a part of the Sydney FC family as he continues his coaching at the Sky Blues Holiday Clinics this Autumn.

Palumbo, who has been coaching with the Sky Blues at their Holiday Clinics and Sporting Schools programs since 2015 sung the praises of Sydney FC’s community efforts and revealed how proud he was to be associated with the Sky Blues.

“I get a sense of pride coaching with the club,” he said.

“You’re a part of Sydney FC and a lot of coaches out there would love to coach for a top team like Sydney FC.

“The Clinics are great, there’s a lot of experienced coaches who are enjoying their time with the kids. Everyone is learning off each other, and it’s great to have the players involved as well with the signing sessions. I feel like the kids always enjoy themselves over the three days.

“It’s a great experience and not many other camps or academies provide this kind of experience. The facilities are great and they get the chance to meet players, where else can you do that.

“Overall it’s a real family club, if they want to come and have a good time and be a part of a family, then they should come along and do a camp.” 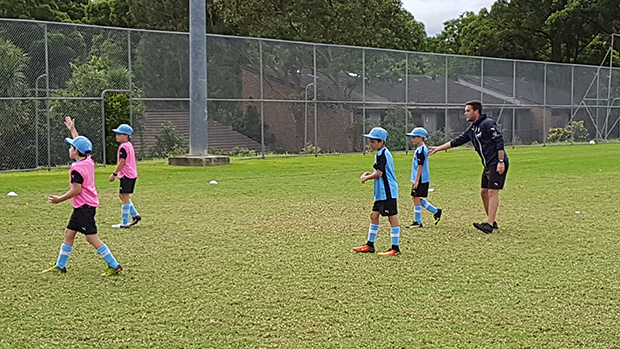 Palumbo said the Sky Blues community efforts had increased tenfold since he began coaching with Sydney FC, as he revealed how he got his break and joined one of Australia’s biggest clubs.

“I started coaching with Sydney FC in 2015. I’ve been two years with the club and it’s been very enjoyable,” he said.

“It’s great coaching with the club,” he continued.

“The kids are great, the coaches are great and every session is well structured. There’s a lot going forward from the past two years, there’s a lot more kids getting involved in it and a lot more schools taking up the Sporting Schools programs.

“The Clinics are also growing a lot as well, from when I started there weren’t many camps but now there are many locations all around Sydney.”

Sydney FC’s Holiday Clinics are currently running and there’s one week to go, with places still available. Visit sydneyfc.com/community for more information and to register.