Sydney FC recorded their biggest ever win in New Zealand with a commanding 3-0 victory over the Wellington Phoenix to remain joint second on the ladder with four games left to play.

Sydney FC remain undefeated away from home and have reduced the gap at the top of the table to one point with their biggest ever win in New Zealand against the Wellington Phoenix on Sunday.

A first ever Hyundai A-League goal to Jacques Faty, coupled with strikes to Shane Smeltz and Seb Ryall, eased the Sky Blues to a commanding first half lead that they didn’t sacrifice in the second 45 as they remain in joint second position with a valuable three points.

Joel Griffiths had a prime chance to open the scoring within the first minute of the first half but the former Sky Blue was foiled by Janjetovic in goals and from then on in it was all Sydney FC, as the Sky Blues put in a dominant first half performance to take in a 3-0 lead.

A more composed Phoenix came out in the second half and pushed the Sky Blues all the way as the Sydney FC back line were forced to work to preserve Janjetovic’s clean sheet. A fantastic Jurman lunge denied Krishna in one the Phoenix’s better chances before both sides were reduced to 10 men following dismissals to Riera and Smeltz with Sydney FC playing out to the final whistle to take the win.

Sydney FC return to Allianz Stadium on Saturday 4 April to take on fellow top six side Adelaide United in their final home match of the regular season (kick off 7:30pm).

Graham Arnold: “We try to treat all the games the same whether we’re at home or away, the players like the routine when we’re away and it was a good performance.

“It was a good performance by us but one that we won’t get carried away with. I’ve asked the players in the last few weeks to lift the intensity, the pressure, and I felt we did that very well against Wellington. Our game plan today was to put some higher pressure on and try and keep their very good ball players in midfield off the ball.

“We’ve got weapons upfront, it’s a privilege when you don’t have Janko that you have Shane Smeltz.”

9’ FATY GOAL – A curled in Naumoff corner isn’t dealt with by the Phoenix and Jacques Faty is on hand at the far post to volley home for his first ever Hyundai A-League goal.

28’ SMELTZ GOAL – A long shot from Naumoff flies into the path of Shane Smeltz in the six yard box and the Kiwi international takes one touch before burying into the bottom corner. Replays show the Phoenix right back was keeping Smeltz onside despite appeals for the linesman’s flag to be raised.

40’ RYALL GOAL – Capping off his 150th appearance in the A-League, a goal mouth scramble sees the ball ricochet around in the area with Ryall getting the final touch as it bounces into the net. 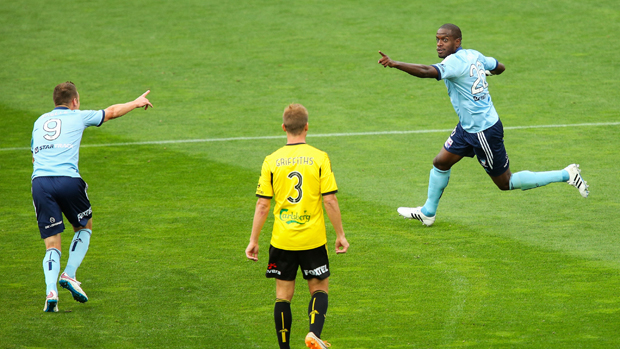 1’ JANJETOVIC SAVE – A loose ball releases Griffiths but the former Sky Blue is foiled by Janjetovic from close range when well placed to score.

24’ NAUMOFF HEADER – Finding time on the right flank Ibini measures a cross towards the back post that sees Naumoff out-leap his marker, however his header flies over.

31’ NAUMOFF SHOT – Jinking past two Phoenix defenders, Christopher Naumoff breaks into the area but he skews his left footed shot past the far post.

47’ IBINI CHANCE – Brosque releases Ibini who charges into the box, one on one, but his touch is heavy and Moss puts it out for a corner.

51’ JURMAN CHALLENGE – Matt Jurman puts in an excellent diving challenge to deny Krishna who was sliding in to meet Appiah’s curling cross.

60’ STAMBOLZIEV SHOT – Showing all his pace, Stambolziev breaks into the box but he blasts over from an acute angle.

68’ RIERA RED CARD – Albert Riera is sent off following a late sliding challenge on Tavares which earns him a second yellow card and his dismissal.

81’ MILOS FREE KICK BLOCKED – With a dangerous free kick on the edge of the area, Milos looks to whip it in but the wall does its job and clears the Sky Blues final chance of the match.

Sydney FC Head Coach Graham Arnold was made two changes to the starting side that fell to Melbourne City at Allianz Stadium last weekend. Hyundai A-League golden boot chart topper Marc Janko was away on international duty, with Shane Smeltz assuming his role up front while Alex Gersbach returned to the bench as Nikola Petkovic slotted in at left back. There was a first return for Jacques Faty in central defence following his recovery from a hamstring injury, while Peter Triantis returned to the bench as Terry Antonis remained sidelined with a knee knock. Sebastian Ryall made his 150th Hyundai A-League appearance as he started at right back.