It was a fun filled record breaking Summer Holiday Clinics for Sydney FC, with fresh faces learning football the Sky Blue way during the festive break and into the New Year.

Sydney FC held clinics across six affiliated association areas over Summer including a first ever Clinic at Forestville and Leichhardt, and Community Football Manager Paul Reid said it was exciting to bring the Sydney FC brand of football to every corner of the city.

“Sydney FC realise that there are football enthusiastic juniors that support the club right across Sydney,” he said.

“It’s great that we are able to provide so many kids with the opportunity to have a fun and memorable experience during the school holidays.”

With the Sky Blues enjoying success in the Westfield W-League with a record breaking ninth Finals Series appearance, Reid said it was pleasing to see that their success has transpired at the grassroots level where a record number of girls took part in the Clinics.

“There are always girls that attend our Holiday Clinics but there was a big increase this school holiday period which was great to see,” he said.

“It is something that Sydney FC would like to see continuing in the future as there has been a huge increase in the number of girls playing and enjoying football over the last few years and we hope that we continue to see more embrace the Sky Blue way.” 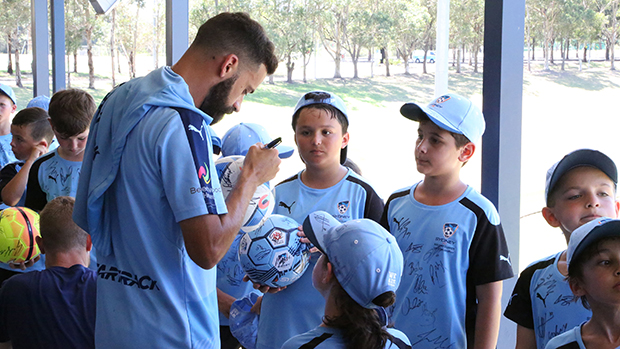 As an added bonus to participating in the Clinics, registrants over the festive period went into the running to win an exclusive game day experience, with 10 lucky kids seeing our Hyundai A-League clash against Adelaide United at Allianz Stadium from a different perspective.

“I was more than happy to take the participants on a pre-game tour of the dressing rooms, tunnel and field of play before the Adelaide game,” Reid said of the experience.

“To witness the smiles on the faces of the boys and girls and even the parents when they were greeted by many of the Sydney FC A-League players in the dressing room prior to the game was definitely a highlight.

“To complete the game day experience, the kids were then fortunate enough to stand on the side of the pitch to watch the Sydney FC team warm up, they formed a guard of honour as the player’s walked out prior to the game, as well as being able to watch the game from the player’s enclosure right next to the tunnel.

“The kids and the parents were still talking about it when I met them at their respective clinics during the school holidays.”

Sydney FC’s Holiday Clinics will return in the Easter break with venues and dates TBC. Stay up to date with new locations and dates by regularly visiting sydneyfc.com/community