A brace to Bobô and a Jordy Buijs effort cancelled out Marc Warren and Adam Taggart’s strikes for the West Australians in a fast-paced encounter.

Perth were quick out of the blocks with Marc Warren opening the scoring on 11 minutes, but the Sky Blues then seized control and began to stretch the Perth defence with intricate passes and switches of play.

Jordy Buijs levelled after jinking past two defenders before Bobô’s turn and low shot ensured the Sky Blues led at half time.

The second half opened at a frenetic pace with Sydney FC looking lively and creating a host of chances, but it was Adam Taggart who equalised, tapping home from close range.

As substitutions changed the dynamic of the game it was Bobô who found the match winner, firing home from Anthony Kalik’s through ball.

Chances came in the dying minutes for both sides, however it was the Sky Blues who remained strong for victory in Head Coach Graham Arnold’s squad’s latest pre-season encounter. 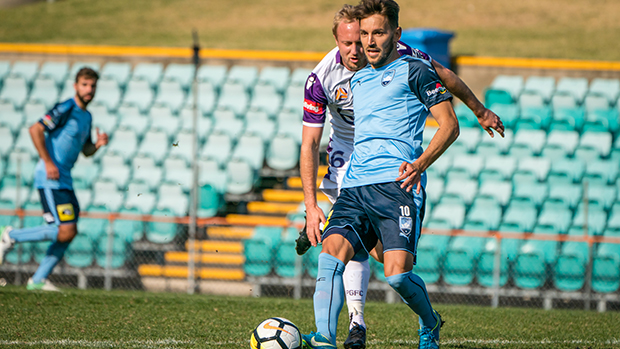 Graham Arnold: “It was a good workout and physically it was very good, we got eight players through 90 minutes, defensively it was also a good performance. The goals conceded we’ll fix up but overall it was quite good. I thought Retre was excellent when he came on and Bobô was fantastic with two goals, but the most important thing was we got through 90 minutes with no trouble.” 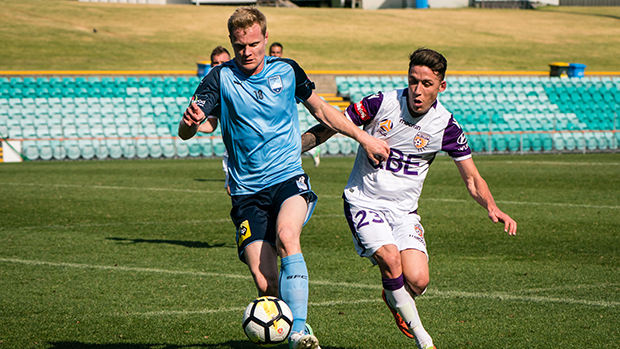 11’ WARREN GOAL – Warren is first to a loose ball that takes him one on one and he takes one touch before placing it into the bottom left corner.

29’ BUIJS GOAL – Jordy Buijs charges out of defence while on the attack and pounces on a loose ball before seeing his shot from inside the area deflected in.

32’ BOBÔ GOAL – The Brazilian is first to a loose ball on the edge of the Perth area and he turns with his back to goal, jinks past two defenders, and fires in low beyond Reddy.

53’ TAGGART GOAL – A Perth ball over the top into the area finds Neville who squares it with his head to Taggart to tap into an open goal.

77’ BOBÔ GOAL – A Retre ball forward from halfway splits the Perth defence and releases Bobô one on one and the Brazilian calmly dispatches it into the bottom corner across Reddy. 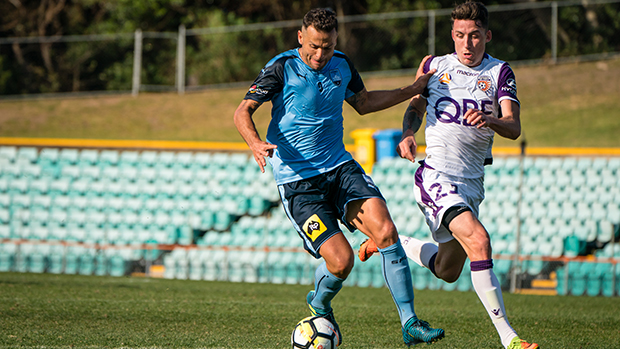 15’ CASTRO SHOT – Perth break forward and a low cutback finds Castro on the edge of the area, and the Spaniard fires his low effort straight into the arms of Redmayne.

19’ WILKSHIRE EFFORT – The Sky Blues work the ball forward to Bobô who controls and turns before playing in Wilkshire who blazes wide from outside the box on the right.

20’ SIMON HEADS OVER – Josh Brillante cuts inside and passes to Carney who picks out Matt Simon in the area with a chipped ball, however the towering forward can’t steer his header in.

43’ TORRES SHOT – Xavi Torres picks the ball up with time and space to shoot well outside the Sky Blues area and he blasts it high over the bar.

51’ NINKOVIC HOOKS OVER – Matt Simon sends a deep cross into the Perth area and finds Ninkovic but the Serbian can’t keep his hooked effort down.

52’ REDMAYE SAVE – Taggart turns and shoots from point blank range after a ball is ricocheted into his path but Redmayne is down low to parry the effort away.

61’ BRILLANTE EFFORT BLOCKED – A deep cross from Zullo finds Brillante at the far post who volleys it at goal, but his effort is blocked out by Warren in defence.

74’ KALIK CHANCE – A splitting ball from Ninkovic releases Kalik into the area on the right, the youngster takes it around Reddy but can’t cut it back for the goal and the ball runs out.

86’ BOBÔ CHANCE – A slide ball from Kalik plays in Bobô but he drags his shot wide from the edge of the box under pressure from his marker. 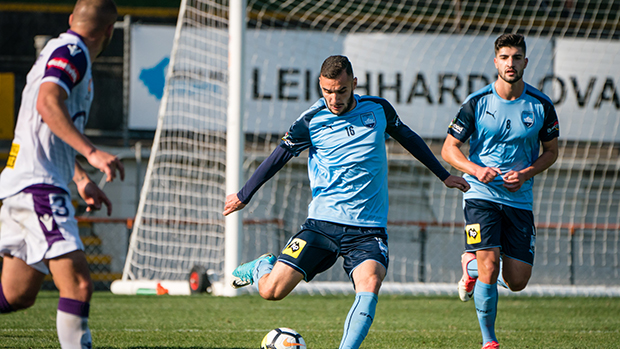 Head Coach Graham Arnold fielded a strong starting XI with only Adrian Mierzejewski, Alex Brosque, Alex Cisak and Aaron Calver absent. Matt Simon was handed a start and tasked with leading the Sky Blues front line while Michael Zullo returned from his knock sustained in our FFA Cup Quarter Final to resume his role on the left side of defence. There was a touch of youth about the Sky Blues bench with Tom Heward-Belle, Chris Zuvela, Cristian Gonzalez and Anthony Kalik all joining the experienced Seb Ryall as substitutes.