Sydney FC scored five unanswered goals to secure a comeback 5-2 win against Parramatta FC, their first win in the PlayStation®4 National Premier Leagues NSW Men’s competition, as both teams played out their washed out round 2 fixture on Wednesday evening.

Despite trailing 2-0 at the half time break after goals to Parramatta’s, a Sydney FC Community Football Officer, Howard Fondyke and Jacob Ott, the Sky Blues completed an incredible comeback to notch their maiden victory.

Goals to Charles Lokolingoy, Bai Antoniou as well as strikes to Chris Zuvela, Alusine Fofanah and Cristian Gonzalez did the damage for the visitors.

It was a tough day at the office for Parramatta and specifically their goalkeeper Chris Moore who will be hoping to forget this match as quickly as possible.

It was a scintillating start to the clash as Sydney FC immediately set out to stretch a brawny Parramatta defence.

Sydney FC striker Lokolingoy provided an early scare for the Parramatta defence when he broke the line after a lofted ball over the top. However, the assistant referee’s flag put a sudden end to the play.

Parramatta soaked up the early pressure and hit back hard in the 12th minute. 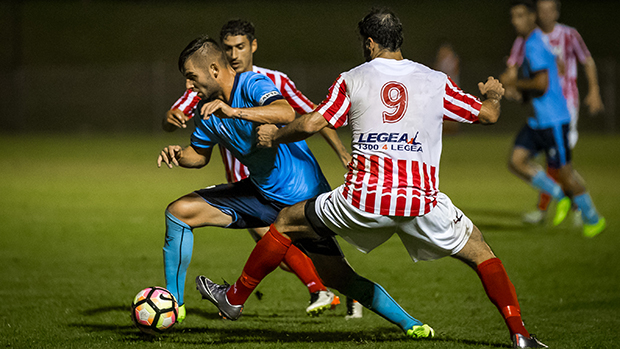 Tomislav Mijic leapt above the defence and headed towards the top right corner, but Sydney keeper Thomas Heward-Belle tipped the ball over the crossbar with a diving save.

Heward-Belle could do little to stop Parramatta’s next effort on goal as Eagles winger Ott cut in from the right past two defenders and powered his shot from outside the box into the bottom left corner of the net.

With a 1-0 advantage, the home side increased its intensity and before too long they had doubled their lead.

A looping cross into the box was superbly put away by Fondyke to give Parramatta a handy two-goal advantage.

In the 33rd minute Mijic was denied again by a diving Heward-Belle with Parramatta holding the upper hand into the halftime break.

The second half couldn’t have been anymore different.

Whatever Sydney FC coach Robbie Stanton said in the locker room worked with the Sky Blues dominating from the outset of the second stanza.

Within three minutes they were on the scoreboard when Lokolingoy capitalised on a miss kick from Parramatta shot stopper Chris Moore to tap home into an empty net.

The fight back had just begun for Sydney and in the 63rd minute Gonzalez levelled the scores with a curling free kick which Moore failed to read. 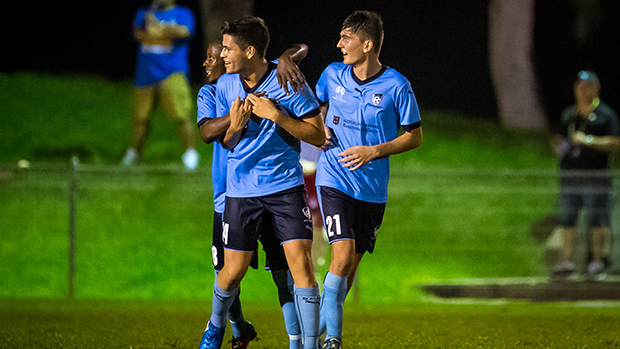 By the 67th minute, incredibly, Stanton’s side were in the lead with Fofanah tapping into an empty net after Lokolingoy dribbled around Moore after the Parramatta shot stopper raced off his line.

In the 69th minute the lead doubled.

An incredible solo run from Zuvela evaded five Parramatta defenders before a blistering shot hammered into the back of the net.

Antoniou ended the rout and confirmed the Sky Blues first win in the PlayStation®4 National Premier Leagues NSW Men’s competition with another rasping shot which Moore could do nothing about.

“Today we responded very well to adversity and I am delighted with the way the players executed the gameplay,” he said.

“At half time we made a number of adjustments and each player fulfilled their role which helped us to victory.

“I was confident if we did the little things right we stood a chance of getting a result. I can’t be anything other than happy with how everything went.”

A sombre Parramatta assistant coach Mark Zecchin was looking at the bigger picture after the match.

“It was only our second game of the season so we can’t get too bogged down in the result,” he said.

“Tonight we let ourselves down a bit. I don’t think it is a matter of physically not being capable with opposition sides, but more so we were unable to respond mentally to how the match played out.

“It is early days and we can only improve from here.”