Sydney FC welcomed the PUMA Champion of Champions for 2016 to Allianz Stadium on Saturday 26 November for their annual winners’ parade in recognition of their feats.

Commencing in 1968, the PUMA Champion of Champions tournament is one of the most prestigious tournaments in the footballing calendar, with the champions from each association throughout NSW playing against each other in a knock-out competition. There are 18 different age groups, ranging from the U12 girls and boys, all the way up to Over 30 Women and Over 45 Men.

Eleven winning teams and their families were in attendance at our Round 8 clash at Allianz Stadium against Adelaide United. Winners enjoyed the match and took part in a half-time winners parade around the Allianz Stadium pitch.

Sydney FC Community Football Manager Paul Reid said the parade was a just reward for the achievements of all the clubs.

“To win the Champion of Champions competition is no easy feat,” Reid said.

“We were pleased to host each of the deserved winners at Allianz Stadium. It’s a special experience setting foot on the Allianz Stadium pitch and we hope all the participants enjoyed their night and their well-earned recognition.”

U12 boys Champion of Champions Hanwood Football Club from Griffith and District Amateur Football Association showed their determination to make the parade with the team and their parents making the 6.5 hour trip from Griffith to participate. 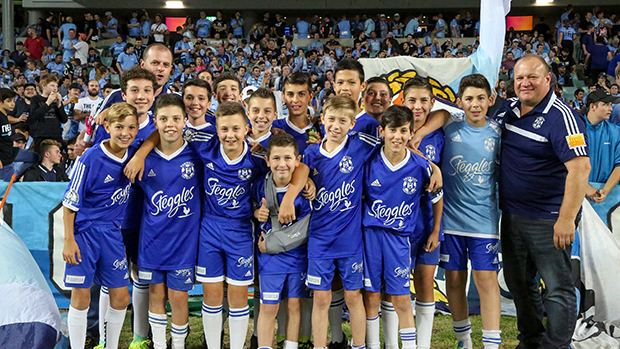 The full list of 2016 Champions of Champions who took part in the parade are:

Sydney FC are avid supporters of active healthy lifestyles and encourage all boys and girls to participate in football programs with their local clubs. Registrations for your local grassroots football club across all NSW associations begin from January at www.myfootballclub.com.au. We can’t wait to welcome next year’s PUMA Champion of Champions winners to a match in Season 2017/18.