An early penalty to Keelin Winters and an own goal by Teigen Allen cancelled out Jasmyne Spencers’ second half strike in what was a spirited display by the Sky Blues.

The Wanderers took an early lead via the penalty spot before Sydney FC clawed their way back into the contest. A number of half chances fell the Sky Blues way however they were unable to convert those chances into goals as a fortuitous own goal handed the points to the Wanderers.

Sydney FC remain in second place on the Westfield W-League ladder and will be looking to bounce back against the Brisbane Roar next week at Lambert Park with only five rounds left to play.

Dan Barrett: “I think we made things very difficult for ourselves in the first half and I think we just started too slow but just knowing we can be better and we’ve got next week coming up will spur us on.

“We had a couple of good openings but were unlucky today. We’ll go back have a hard look at this game and each other and get in and get three points against Brisbane at Lambert Park next week.

“We can be better, our opponents were up for the game today and we knew that, but we will be back and better next week for sure.”

14’ WINTERS GOAL – After breaking in numbers Western Sydney’s Keelin Winters burst into the box with Teigen Allen tracking back. In attempting to make a challenge Allen fouled Winters with the referee pointing to the spot and Winters made no mistake as she slammed home from 12 yards.

55’ SPENCER GOAL – A loose ball falls to Jasmyne Spencer outside the Wanderers penalty area. The American forward takes a touch and drives forward before unleashing an unstoppable strike into the bottom corner to level the scores.

62’ ALLEN OWN GOAL – Caitlin Jarvie bursts into the Sky Blues penalty area on the right flank and attempts to cut the ball back however it ricochets off a helpless Teigen Allen who can only divert the ball into her own net with McLaren stranded in goal. 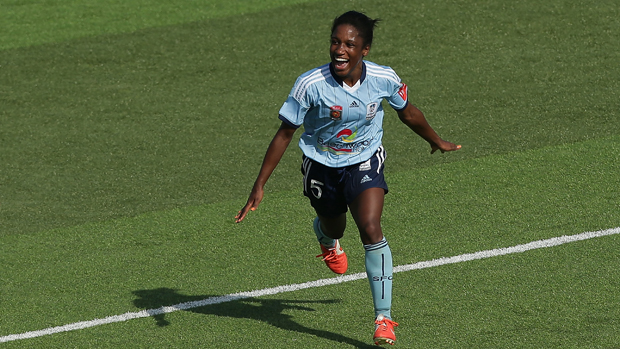 8’ SPENCER CHANCE – Amy Harrison picked the ball up deep on the left and sent in an enticing cross that only just eludes a leaping Jasmyne Spencers’ head after she found space inside the area.

18’ UZUNLAR SHOT – Servet Uzunlar tries her luck from distance after picking the ball up in midfield and driving forward. Her rasping drive forces Burke to make a low save.

28’ ROLLASON FREE KICK – After Jasmyne Spencer was fouled on the edge of the area Renee Rollason stepped up to take the free kick, however her effort curled just wide of Burke’s upright.

45+3’ HARRISON EFFORT – In the final play of the half Amy Harrison was only inches away from converting as a teasing cross bounced just too far in front of her with the Wanderers defence beaten. 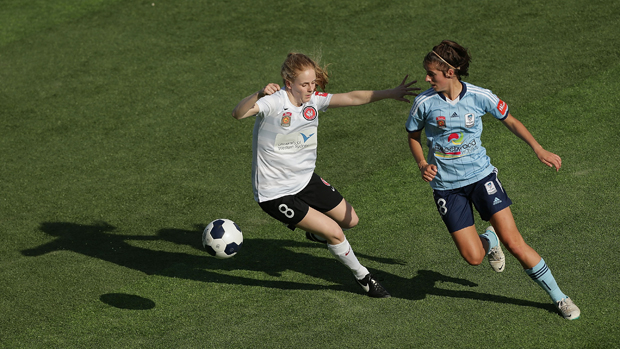 59’ UZUNLAR DRIVE – Another fierce long range effort from Servet Uzunlar has Trudy Burke scrambling in goals and the Wanderers keeper gathers the ball at the second attempt.

65’ BOLGER CHANCE – A quick free kick routine sees Bolger released one on one however the ball gets caught under her feet as she attempts to shoot and the Wanderers defence clear the danger.

70’ CARNEY HITS THE BAR – A loose ball falls to an onrushing Carney who takes the ball towards McLaren in the Sky Blues goal before attempting a deft chip that hits the bar and is cleared by the Sydney FC defence.

81’ MCLAREN SAVE – Baker breaks the Sydney FC offside traps an attempts to place the ball beyond McLaren however the Sky Blues keeper makes a fantastic save with her feet and the danger is cleared.

Head Coach Daniel Barrett shook up his squad with a number of changes as Casey Dumont dropped out through injury to be replaced by new signing Sian McLaren, while Ellyse Perry was absent with cricket commitments. This allowed Natalie Tobin and Renee Rollason to re-assume starting berths as captain Teresa Polias remained absent after picking up a knock against Newcastle Jets two weeks prior.

BECOME A W-LEAGUE MEMBER TODAY! – Sydney FC’s W-League squad would love your support again as they strive to regain the W-League Championship. See the girls play for just $75 or for the discounted price of $45 if you’re a current A-League Member.