Sydney FC fought hard but were ultimately undone by a determined Rockdale City Suns in their opening match of the PlayStation®4 National Premier Leagues NSW Men’s season at Lambert Park on Saturday.

A goal from Jordan Figon midway through the second half was the difference as the burly striker powered the ball home from close range.

Rockdale’s Alec Urosevski and Sydney’s Chris Zuvela also found the back of the net in a match which could’ve featured a very different result with an explosive Sky Blues attack a constant threat.

Sydney FC were on a mission to prove they are no shrinking violets in the opening stages of the match.

Rockdale’s big name signing Ante Covic was called into action for the first time in the 10th minute when he was forced to make a diving save to his left to deny a stinging shot from Sydney’s Chris Zuvela. 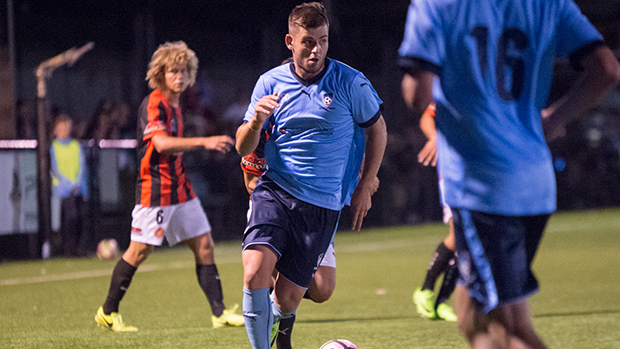 Rockdale worked their way into the match as the half progressed with the Sky Blues rapid attack beginning to fade.

A Rockdale free kick from 30 yards out from goal in the 18th minute proved to be a game changer.

A pin point delivery from Paul Reid hit Alec Urosevski in stride with the zippy winger volleying over the head of the Sky Blues shot stopper.

The goal was a wakeup call for the competition young guns and Sydney FC fired back into action.

The pace of Lokolingoy, Antoniou and midfielder Chris Zuvela continued to trouble the Suns.

Covic was once again called into action with the veteran gloveman making a string of acrobatic saves.

Sydney finally found a breakthrough in the 37th minute after a slick passing movement from defence.

On the cusp of half time Rockdale were unlucky not to take the lead again as Urosevski cannoned a free kick into the crossbar.

There was more of the same from Sydney in the second half with their pacey attack challenging the Rockdale defence. 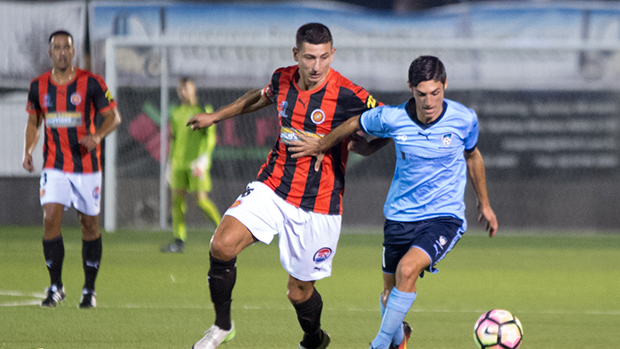 Will Mutch missed a golden opportunity in the 53rd minute when his shot was blocked by a desperate Rockdale defence.

The Suns dug deep and were rewarded for their perseverance in the 76th minute.

New signing Jordan Figon bundled the ball over the goal line from close range after a scrappy battle for the ball in the penalty area.

Sydney pushed for a late equaliser and were unlucky in the 82nd minute when Juan Zapata’s shot was blocked by Rockdale captain Daniel Petkovski as the visitors clung onto a 2-1 win.

Suns coach Paul Reid said he was proud of the way his players dug deep against a relentless Sydney attack.

“I think it has been a few years since Rockdale has won in the first round so to collect all three points is a great feeling.

“Sydney are a quality side and shouldn’t be underestimated this season.

“We were pushed all the way but everything we had been working on through the preseason helped us get the win in the end.

Another proud coach was Sydney FC gaffer Robbie Stanton who felt his team was unlucky to come away from their first game at this level without any points.

“We dominated the game in my opinion. In the end experience helped get Rockdale home,” he said.

“As a team we can take a lot from this game. It was a quality performance and it goes to show that this is a team made to perform against quality opposition.

“If we play this way all year but not win a game I will still be very happy.”