Wollongong Wolves and Sydney FC played out an open and entertaining 1-1 draw at WIN Stadium on Saturday night.

The goals hugged either side of the interval with Peter Simonoski opening the scoring for Wolves from the penalty spot late in the opening half.

The equaliser came soon after the restart as Jeremy Cox tucked the ball into an open net to cap off a swift team goal for the Young Sky Blues.

Both sides had chances to claim all three points, yet a draw was perhaps a fair result in an action packed match which kept the fans on the edge of their seats for the full ninety minutes.

Sydney FC used their youthful pace to good effect in the opening minutes, seeing an early penalty shout for Cox waved away before Cameron Devlin’s early chance was well held by Justin Pasfield.

The experience of Wolves then kicked into gear as they began to stroke the ball around and control the tempo of the match.

Darcy Madden, who had a fine game on the right side of the hosts’ back three, created the first quality chance of the match for Wolves, stealing possession and launching a quick counterattack which culminated in Simonoski blasting just wide from the edge of the box.

The pace of the visitors continued to provide their main outlet as Luke Ivanovic, seemingly well covered, burned past 3 players on the left wing before swerving in a top notch delivery with the outside of his right boot for Devlin who knocked his finish wide of goal.

The Young Sky Blues had the ball in the net on the half hour mark when a Jerry Skotadis free kick curled onto the head of Patrick Flottmann.

The elegant young defender rose gracefully to head the ball back across goal and into the net only to have his celebrations cut short by an offside flag.

Both sides went close as the pattern of play continued with Cox pulling an effort wide of goal before Josh Macdonald buried a chance into the side netting.

As the half-time whistle loomed the hosts earned the golden opportunity they’d so patiently waited for, albeit from the penalty spot as Flottmann nudged through the back of Macdonald as he burst into the box.

Simonoski stepped up to the spot, coolly sending Dragicevic the wrong way to break the deadlock with the last action of the half. 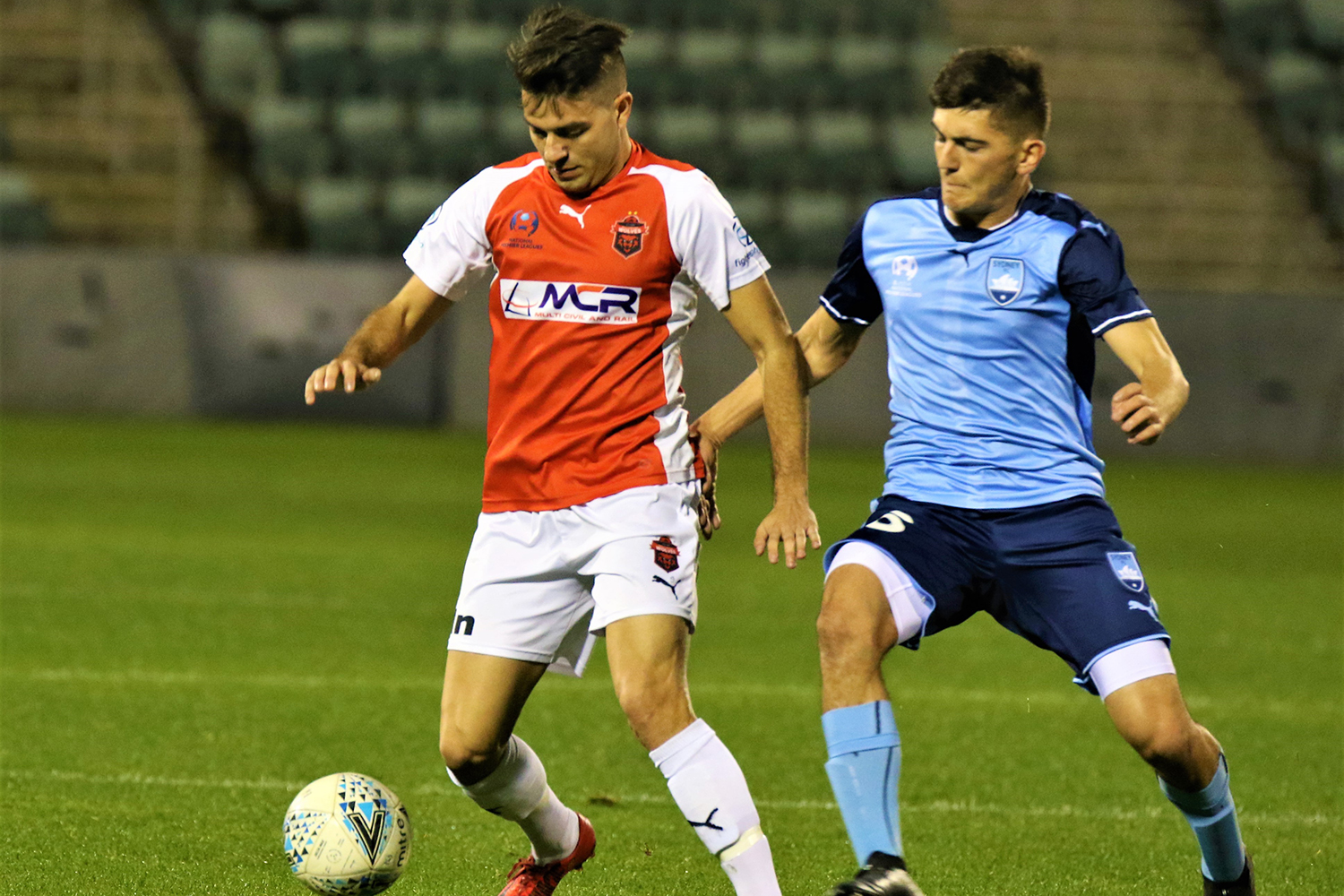 After the restart Wolves sought to continue with their patient, possession-based approach, while Sydney FC persistently broke forward with absolute precision each time they won the ball.

The visitors’ direct approach soon reaped reward in the form of an equalising goal.

Captain Sam McIllhatton burst out of midfield and down the right flank and centred for Devlin, who expertly drew in Pasfield before squaring the ball to Cox for the simplest of tap-ins to finish off a quality team goal.

The leveller opened the centre of the park up significantly, yet both sides defended superbly to keep opportunities to a minimum until late on.

Simonoski headed wide from a corner on the hour mark before Cox was denied by a brave block from Madden at the other end.

The match completely opened up the the closing stages as both sides surged forward in search of a winner.

Devlin fired a chance over the crossbar before Dragicevic denied Michael Robinson and Macdonald with comfortable saves.

Substitute Jordan Swibel had the best chance to seal a result for the visitors in added time when he run onto a long ball and headed it past the onrushing Pasfield, yet the youngster was unlucky with his finish as he grazed the crossbar from a difficult angle.

Points were shared at full time, and while both sides may look back at what may have been, the spectators surely went home happy after a highly entertaining Saturday night of football.

While the game was a joy to watch from the stands, it was less so for Wollongong Wolves coach Jacob Timpano who had hoped his side had a stronger handle on the game.

“It wasn’t the game we really wanted from the sideline,” said Timpano.

“It was end to end, it was open, there was many chances both ways.

“Credit to Sydney, good group of young boys and they make it hard for you with the way they play.

“We didn’t handle it as well as we should at times, a bit more quality from us in the front third would have made things a bit easier, but it wasn’t to be today.”

Despite the match plan not going to script, Wolves defended well when they needed it most to take a hard earned point from the match.

“They still had a few opportunities – it was probably the most open game we’ve experienced all season.

“You can take some positives from that, we had a go, but also got exposed a little bit and let Sydney into it.

“A bit unfortunate we couldn’t get the win we needed, but we’ll take the point and move on to next week.”

Sydney FC coach Robbie Stanton happy with the performance of his side, praising his youngsters for their efforts in both attack and defence.

“We’ve been playing like that all year,” said Stanton.

“We create chances, absorb some pressure now after working on our defensive structure, and once we started to get in the game we started to find the lines between the lines.

“When we start to go we go quick, we go dynamic, we just need to final end product to add a finish to that.

“I thought the goal was nice and composed – I changed it up a bit and put Cam (Devlin) up there to get him more in the front third with his composure and his ability with little deft touches.

“It was his little cut back that got the goal and that worked well.”

Stanton’s young squad were up against it at times and did well to grow into the match in the second half after a few adjustments during the interval.

“They were really good to pin us back in the first half,” explained Stanton.

“Our movement and buildup I needed to fix and we adjusted that at half time.

“Maybe they got tired a bit more, but our level stayed the same and we just got stronger.

“In the end I think we could have got three points today, but I’m really happy.”

Benjamin Koop’s brace guided Sydney FC to a crucial win over Wollongong Wolves in the pair’s third versus fourth encounter at WIN Stadium.

The Sky Blues attacker hit a double to edge out a Jordan Nikolovski goal for the home side and ensure Sydney go above Wolves on the table.

Following their excellent 3-1 victory over leaders Sutherland Sharks last week, it was another encouraging display from Giancarlo Italiano’s side who remain in touching distance with competition frontrunners.

Wollongong, who had won three in a row without conceding a goal prior to the defeat, drop in fourth position and host the Sharks in a huge clash at Albert Butler Memorial Park next weekend.