Sky Blues All Square With Hakoah

Sydney FC and Hakoah Sydney City East shared the points on a frosty night at Lambert Park, settling for a 1-1 draw after exchanging goals in the first half of the PlayStation®4 National Premier Leagues NSW Men’s competition clash.

Hakoah’s player manager Gavin Rae opened the scoring early, albeit for the opposition, with an own goal, before Hakoah pegged their opponents back with a Neil Jablonski header a little under twenty minutes later.

A goalless second half wasn’t for the want of trying, but a draw would have appeared the fairest result – and so it ended.

Dean Bereveskos had the game’s first shot in the opening minutes, testing Mitchell Evans from range with an effort which looped towards the far post but was easily taken by the goalkeeper. His teammate, Connor Shaddock, was next to call the goalkeeper into action, flicking a header towards the back post which Evans saved well.

Sydney FC soaked up the early pressure before easing into the game, and Nicola Kuleski might have opened the scoring soon after Shaddock’s header when he burst clear at the top of the box, but Anthony Bouzanis was alive to the danger and made a routine save.

The hosts were finding room to move on the flanks, and it was little surprise that the game’s first goal came from a ball played down the wing. Under pressure from John Iredale, Gavin Rae stretched to poke a loose pass back to Bouzanis which caught the keeper off guard and rolled in at the far post, giving Sydney an early lead.

Determined to make amends for a collective error in defence, Hakoah pushed out in search of an equaliser, and Harry Jones went close with a header which spun past the post before Sydney FC countered with a flowing move, ending with a poor shot from Kuleski which Bouzanis pushed around the post for a corner.

Sydney FC’s lead would last a little under twenty minutes, with Neil Jablonski meeting a cross from the right to head into the empty side of Evans’ goal and level for the visitors. 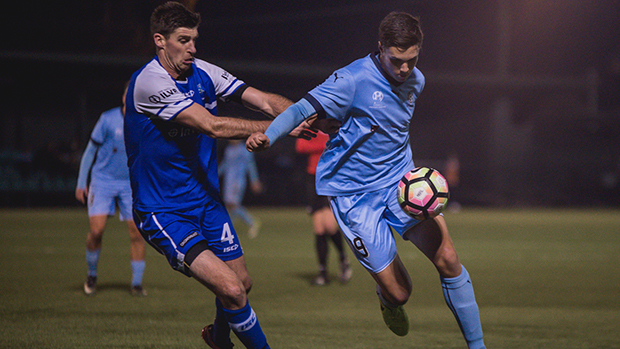 The home side were in the ascendancy as break approached, and went close again on the halftime whistle after Brendan Curtis cut past two defenders before hitting his shot into the side netting. Sydney FC would enjoy the first shot of the second half, too, with Juan Zapata whipping a shot straight at Bouzanis in a slow opening period.

Indeed, it would be another twenty minutes until another shot on goal was registered, as John Iredale strode through the midfield before slipping as he shot, making for a simple save for Bouzanis. Zapata followed up with an effort that flew wide of the right post, before Jablonski provided another reminder of his attacking threat with a header that needed a fingertip save from Evans to push the ball over the bar.

Chances came thick and fast for Sydney FC in the final ten minutes, and John Iredale saw his shot fly across the face of goal before Zapata volleyed over from close range. Kuleski might have stolen the match at the last when he was played through by Zapata in added time, but Bouzanis rushed out to block the shot, leaving both sides to settle for a point.

“It was pretty clear that we dominated that game,” said Sydney FC coach Robbie Stanton.

“But we didn’t take our chances well enough.

“We need to work on our work in the final third – I coached Neil Jablonksi a few years ago, and he’s a player with a lot of experience. It makes a big difference to have that in your team, but I’ve got a good idea of where we’re headed now – I thought we gave a really good display, and I’m really happy with the effort.”

“It was a bit gutting to score the own goal,” said Hakoah’s Gavin Rae.

“It’s just one of those things – it’s a bit disappointing but it happens.

“I was more disappointed with the way we started the game but after we went behind I thought we fought back well, and the draw seems like a fair result in the end.”