Sydney FC’s Brandon O’Neill and Michael Zullo may approach Saturday’s Sydney Derby in different ways, but there’s one thing they both agree on.

Defender Zullo, taking part in his first derby, and midfielder O’Neill, a veteran of three matches, both believe the Sydney Derby is the number one ticket in Australian football, and the pair are relishing Saturday’s encounter at ANZ Stadium.

“It’s an encounter every player envies in the A-League,” O’Neill said.

“It’s probably the best game of football in the home and away matches. The players always get up for the Sydney Derby and it’s always an enjoyable experience.”

“I’ve spoken to players who’ve played in both the Melbourne and Sydney Derbies and they say this one has a bit more feeling in it because it’s representative of the city itself,” Zullo continued.

“I’m definitely looking forward to playing in my first Sydney Derby. It’s going to be an awesome night of football.” 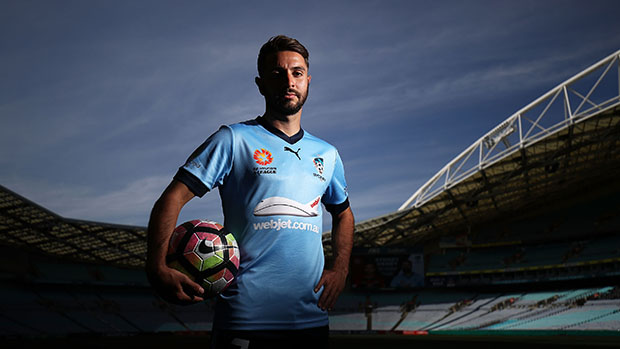 With the match only two sleeps away, the Sky Blues pair are preparing for the match in their own ways.

O’Neill has his eyes set on getting involved in the emotional aspects of the clash, while Zullo will be harnessing that emotion to bring the best out in himself.

I like to channel the energy and put it into my performance,” Zullo said.

“Others like to deflect it and make out that’s it’s just another game, but in reality it’s not another game and I think it’s important to use that as motivation to bring out your best.”

“I love the fiery stuff, it’s what I play the game for to be fair,” countered O’Neill.

“I’ll be in and amongst it, all the players will be.

“It’s round one, it’s an opportunity to get three points, kick on and build some momentum going into the season.”

Sydney FC take on the Western Sydney Wanderers in the first #SydneyDerby of the season at ANZ Stadium on Saturday 8 October (kick off 7:50pm). Catch the match live on Fox Sports 4 or follow @SydneyFC on Twitter for updates.