Sydney FC’s Kyah Simon and Alanna Kennedy have been selected in the final women’s football squad for the Rio 2016 Olympic Games today.

Simon and Kennedy are part of the eighteen Australian footballers united by the goal of climbing onto the Rio 2016 Olympic podium that are heading to Brazil under Westfield Matildas Head Coach and Sydney FC Hall of Fame Member Alen Stajcic.

Making their first appearance since the Athens 2004 Games, of which only co-captain Lisa de Vanna remains, the side is full of confidence after a stellar 12 months.

The team won their first knockout match at a World Cup in 2015 before running through the best Asia had to offer as they qualified undefeated for Rio earlier in the Olympic year.

Now, with the belief they can knock off anyone they face in Brazil, the team is ready to make Australian Olympic history.

“We want to win a medal,” De Vanna, who finished fifth with the Australian Team at the Athens 2004 Games, said.

“Obviously gold is what everyone is fighting for and dreams about but if we come back with any medal it would a massive boost for women’s football in Australia.”

The side features a host of players lining up in some of the toughest leagues in the world, while the increasing strength of the domestic W-League has provided locally based players the perfect platform for international success.

While the team spends the majority of the year playing at different corners of the globe, when this group comes together they are a united force to be reckoned with.

“The coaching staff has a massive influence on the success of the team instilling a sense of family and belief that we go out and play with,” continued De Vanna.

“Along with the skill of the players in this side, it is what sets this team apart from those of the past.” 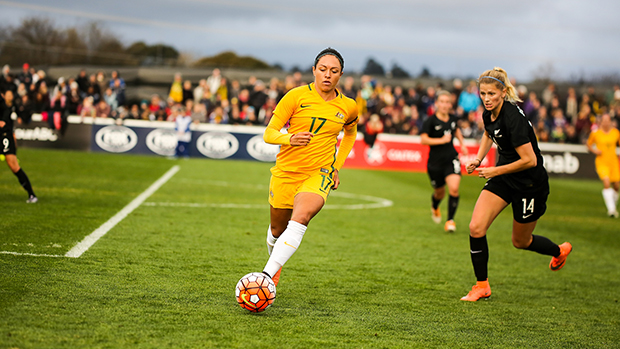 With the side missing out on qualification for both the Beijing 2008 and London 2012 Games, the chance to live out a lifelong dream to represent Australia has finally arrived for the 17 Olympic rookies on the team.

Star forward Kyah Simon made her debut prior to Beijing and will now get her chance to shine on sport’s greatest stage.

“I am very excited and honoured to get the chance to be a part of this team,” the 25-year-old said.

“It’s always been a dream of mine to get this opportunity to play at an Olympic Games and I now can’t wait to get to Brazil and start training with the team.

“The Olympics is the pinnacle of world sport and it will be great to pull on the jersey and know we have the whole country behind us.”

The moment will also be extremely special for the indigenous role model who hopes she can inspire the next generation of indigenous Australians to pursue their dreams.

“I remember sitting in front of the television watching the Sydney 2000 Olympics as Cathy Freeman won gold and that inspired me to do everything I could to reach my aspirations in football,” Simon recalled

“I hope that me making the team will have the same impact on young indigenous Australians to chase their dreams as well.”

While the likes of Simon, De Vanna and her co-captain Clare Polkinghorne are among seven core players who helped Australia claim the 2010 Asian Cup, young gun Ellie Carpenter is fairly fresh to international competition.

The 16-year-old was just four when De Vanna made her Olympic debut in Athens and the defender will now not only be the youngest on the football team in Rio but the youngest of the four hundred plus Australian athletes at the 2016 Games.

“Since I was a kid I’ve always dreamed of being Olympian and I can’t believe it is coming true this early,” said Carpenter.

“Having not been in the national set up for 12 months and now being selected in the team is just crazy. After making my debut earlier this year it made me hungrier to get this spot and now all the hard work has paid off.”

The youngster will not only have some family and friends cheering her on in Brazil but knows the Australian public will be backing one of the nation’s favourite sporting teams to success on the other side of the globe. 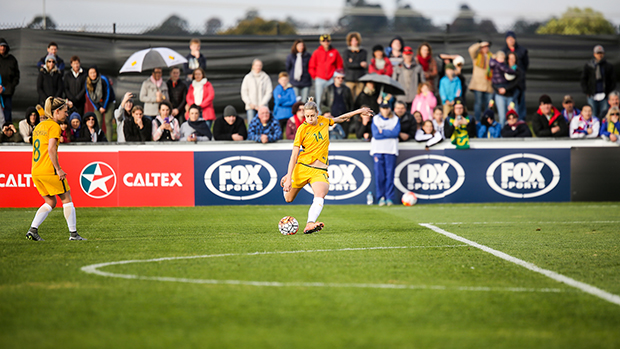 “My mum and dad and some of my aunties will be coming over which will be really cool. Their support means the world to me.

“The support back home has been amazing as well, especially after coming back from the qualifiers it Japan. We can’t thank everyone enough and hope it continues in Brazil and well beyond.”

Australia recently climbed to number five in the world rankings putting them well in the hunt in Rio where they will face Germany, Canada and Zimbabwe in the tournament’s group stage.

“We’ve shown in the past 12 months or so that we’re a competitive team now on the world stage and it’s up to us now to prove that we can take that next step and genuinely compete for medals,” Coach Alen Stajcic said.

“We are in a very tough group with Canada being the reigning bronze medallists, Germany are a powerhouse and Zimbabwe are a bit of an unknown but having come through the African qualifiers we know they will be tough, powerful and unpredictable.”

With the continuing increase in depth in Australian women’s football Stajcic admits it was a tough decision to arrive at the final 18 player squad.

“Probably for the first time in this team’s history we are leaving out players that are in good form who could genuinely play and start in this side.

“We’ve got to a point where there is a strong amount of depth in the team meaning good players miss out.”

The side will now head to Brazil where they will head into camp and play their final match in the lead-up to the Games against host nation Brazil on 24 July.

“We are going to have a long preparation in Brazil and playing games is an important component of that. We are very fortunate to get the chance to play against a top ranked team and one of the favourites for a medal in host nation Brazil.”

The Australian side will be the first to compete in the green and gold at the 2016 Games when they take on Canada in Sao Paolo on August 3, two days out from the Opening Ceremony. They will then face world number two Germany in Sao Paolo (August 6) and world number 93 Zimbabwe in Salvador (August 9).