Sydney FC Westfield W-League striker Remy Siemsen has experienced a whirlwind start to her first ever season with the Sky Blues in 2016/17.

Juggling a NAB Young Footballer of the Year nomination, starting year 12 at high school and scoring goals on the weekend for Sydney FC, Siemsen says she’s enjoying the commitments that come with professional football at only 17 years of age.

“It’s going to be a big year between footballing and schooling but I’m going to have just find that balance,” Siemsen said.

“Year 12 is a big jump but I’ve got good teachers that have been helping me out and catching up on lessons.

“It’s been an amazing [the start to the season], the girls have been really welcoming,” she continued.

“It’s a high level of football and a big jump from what I was playing but I’ve enjoyed every minute of the experience and it’s definitely helping develop me as a player being surrounded by quality players like Kyah Simon and Caitlin Foord.

“The biggest thing I’ve learnt so far is to be disciplined and just to work really hard for your teammates.

“They’re there working hard for you and if you’re not putting in it’s not good enough and that’s not a Sydney FC mindset.

“I’m very honoured to have been nominated for this award and I definitely couldn’t have done it without the girls, they’re the ones making me look good.” 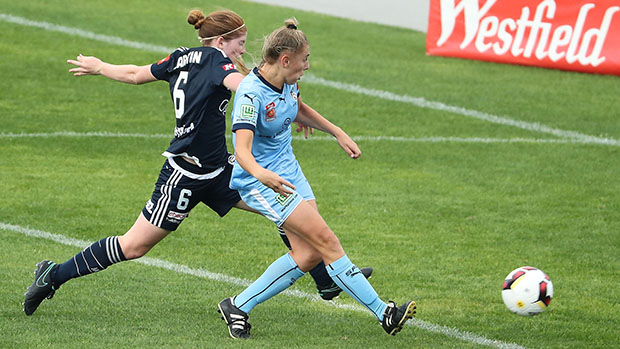 Siemsen said the jump from NPL with Manly United to the Westfield W-League had been a steep rise, but said the rise in quality was perfect for the development of the next generation of footballers.

“The opposition are quite physical and that’s an aspect I’ve had to bring into my game but I’ve found it really easy to settle in because the girls have really helped me,” she said.

“It is a young league, it’s definitely a big jump for some girls and it’s setting the bar high for the up and coming young players and I think that’s going to help with Australian football and the Matildas with the talent coming through.”

Sydney FC’s Westfield W-League squad are next in action away against Perth Glory at Dorrien Gardens on Sunday night (kick off 7pm AEDT). Follow @SydneyFC  on Twitter for score updates.

Sydney FC’s Memberships are on sale now!  Click here to see the range of Membership options for the Westfield W-League 2016/17 season. PLUS catch one Hyundai A-League double header as part of your Membership, at Central Coast Stadium on Sunday 8 January!