A scintillating second half performance saw Sydney FC come from a goal down to defeat the Newcastle Jets in a 4-3 thriller at Hunter Stadium.

The Sky Blues went in at the break a goal down thanks to a first half Enver Alivodic strike but an Alex Brosque brace and another superb strike from Bernie Ibini gave Sydney FC the ascendency within ten minutes of the restart.

Edson Montano pulled one back and an Andrew Hoole penalty saw the home side draw level with a quarter of an hour remaining but substitute Robert Stambolziev popped up 11 minutes from time to ensure the Sky Blues went away with all three points.

The result puts Sydney FC level on points at the top of the Hyundai A-League knowing a draw in their final game at Wellington Phoenix could be enough to secure at least second spot on the ladder.

Graham Arnold:  “I wasn’t happy with the first 20 minutes but I truly believe these boys have got the confidence in themselves that they have an extra gear and when they need to go up and extra gear they go up an extra gear.

“The most important thing is the three points and we are closer and closer to achieving our goals this year.

“What we’ve done to night is keep the pressure on Melbourne Victory tomorrow night. They will see we’ve come equal with them again and it will probably take it to the last round but they’ve got a very tough game against Brisbane Roar tomorrow night.” 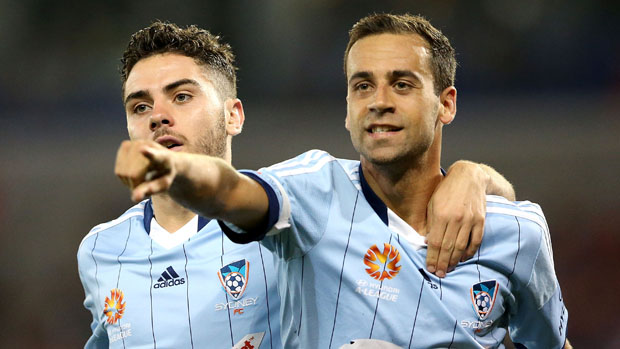 21’ ALIVODIC GOAL – Montano chips a pass beyond the Sydney FC back four to Alivodic and he lifts the bouncing ball over the advancing Janjetovic.

47’ BROSQUE GOAL – Grant threads the ball beyond the Newcastle Jets back four who stop to play the offside but Brosque makes a run from deep to go clear and nudge a right foot shot into the corner.

51’ IBINI GOAL – Ibini picks up the ball in the centre of the pitch and drives towards goal.  The forward unleashes a thunderbolt at Kennedy who parries and Ibini reacts quicker than everyone to win the rebound and lift it into the roof of the net.

55’ BROSQUE GOAL – Gersbach is clear on the left and curls in a whipped ball which Brosque gets to first at the near post to glance a header into the far corner beyond Kennedy.

66’ MONTANO GOAL – Hoole does well to hold off a challenge and get to the byline to cut the ball back.  Montano is in space to turn and poke the ball underneath Janjetovic with the ball crossing the line before Ryall can clear.

75’ HOOLE PENALTY GOAL – Hoole is brought down in the box by Gersbach and the youngster picks himself up of the ground to slot home the spot kick.

79’ STAMBOLZIEV GOAL – Seb Ryall crosses from the right to the back post where Smeltz heads down to Stambolziev who sticks out a right boot to prod home.

16’ JANKO CHANCE – Dimitrijevic lifts the ball beyond the Jets back line to Janko who has got clear of his marker but the Austrian’s left foot volley is wide of the target.

32’ JANKO CHANCE – Another Dimitrijevic chip to the far post to Janko but the outstretched leg of the Austrian can only push the ball just wide.

41’ JANJETOVIC SAVE – Janjetovic is quickly off his line to smother the ball after Hoole played in Cooper who would surely have scored had the keeper not been so quick.

42’ NAUMOFF SHOT SAVED – Dimitrijevic plays a backheel flick to send Naumoff in the clear but the youngster’s shot is blocked by the knees of Kennedy in the Jets goal. 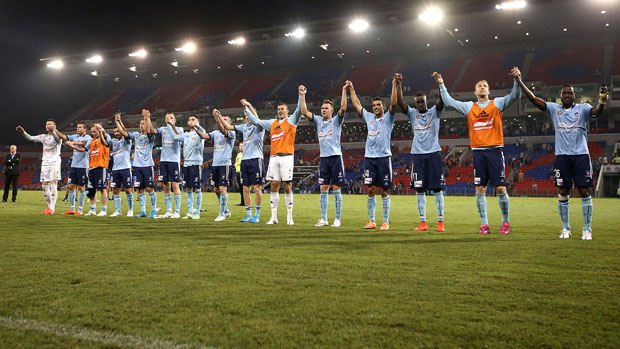 Sydney FC Head Coach Graham Arnold made one change to the starting line-up that beat Perth Glory 3-0 seven days earlier.  Alex Gersbach replaced the injured Nikola Petkovic at left back with the Aaron Calver coming onto the bench.  Shane Smeltz returned from a two match suspension to take a position on the bench.