After enjoying a stellar debut season in the Westfield W-League, youngster Remy Siemsen’s efforts were duly rewarded with her named Westfield W-League Players’ Player of the Year, and Golden Boot, at our Sky Blue Ball awards night on Friday.

Following on from her naming as NAB Young Footballer of the Year at the Dolan Warren Awards, we caught up with the young striker to get her take on everything that’s unravelled in season 2016/17.

Firstly congratulations on the awards, how did it feel when your name was read out?

I couldn’t believe it when my name was read out. I think time stood still for a moment as I was trying to process that my name had actually just been announced. It was a surreal moment for me and the biggest honour of my career to date alongside winning the NAB young footballer of the year. I’m still in shock!

Did you ever expect to be named Player of the Year in your debut season?

I did not expect to be named Player of the Year in my debut season because I play alongside the most talented group of girls who all deserve this award. My main focus for my 1st season of the w-league was to do my best in every opportunity I was given but to be name player of the year by my teammates was the greatest honour.

To be recognised by your teammates as the best in the season, how does that make you feel?

I feel so unbelievably humbled and grateful that my teammates believed in me and supported me throughout this season. They all welcomed me into the team and encouraged and supported every week. I just wanted to get out there every week and work hard for them. 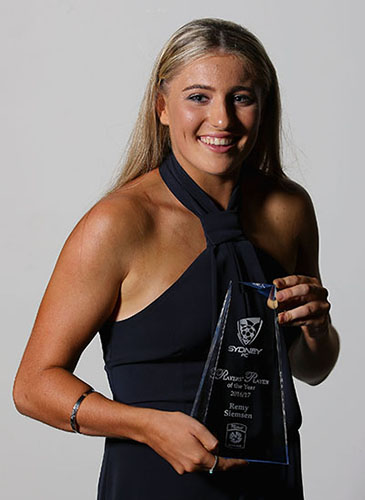 You also took out the Young Player at the Dolan Warren awards, how did that make you feel?

Again, this award was totally unexpected being nominated alongside amazing players such as my fellow young Matilda’s teammates Nicki Flannery and Alex Chidiac. I was extremely honoured to have received such a prestigious award and again I thank my teammates and coaches for helping me achieve this amazing award.

I loved every minute of the w-league season, I was so sad when it all finished. I was happy with my development and growth throughout the season but recognise that I still have a lot to learn and that excites me. I’m hungry for goals and to be playing alongside such talented teammates again and I cannot wait for the 2017/18 season already. Looking forward to putting on the sky blue jersey later this year.

What more do you want to achieve in your career following on from these awards?

I hope to go to the next level in my game, always looking to improve and learn from the best. I hope to represent my country again in the u/20 Young Matildas side for the upcoming World Cup qualifiers in China. My lifelong dream is to play for the Matilda’s and hopefully I can achieve that one day soon. I’m setting myself new goals and targets to achieve in my game and focus for the 2017/18 football year.