Sydney FC Community Football Officer Paul Reid, who oversees the clinics, said the latest sessions were something to be proud of.

“The Sydney FC clinics in the April school holidays were a huge success with a record number of boys and girls attending the 6 different venues across Sydney,” Reid said.

“Sydney FC take pride in making the clinics a fun and enjoyable experience, as this will encourage all boys and girls to develop a love for playing football for many years to come.

“The best thing about the clinics is that there is always a really positive atmosphere throughout the three days and credit must go to the experienced coaches for their enthusiasm while coaching the kids.” 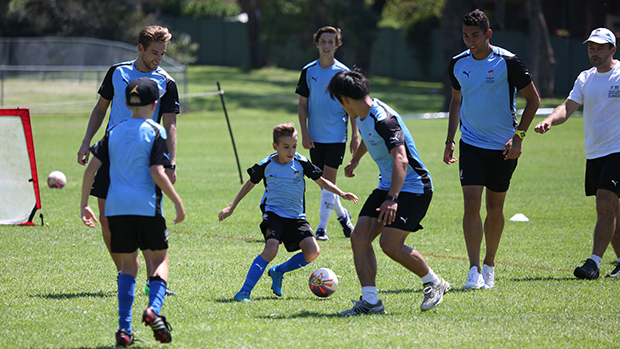 While there were plenty of highlights, including meeting the entire Hyudnai A-league squad for an exclusive signing session, Reid said the part of the clinics he enjoyed the most was the mini-World Cup matches played on the final day.

“The boys and girls always look forward to the World Cup style format after morning tea on the last day,” he said.

“One of the highlights is the atmosphere created by the kids as they watch and cheer on each of the finalists in the different age groups.

“As you can imagine, the kids in both teams play with a smile on their face and feel great. It’s like they have played in front of a sell-out crowd.”

Sydney FC’s School Holiday Clinics will return in July. Stay tuned to the Sky Blues social media and e-communications for venues and dates.