A controversial sending off marred Sydney FC’s Westfield FFA Cup quarter final with Adelaide United as the Reds progressed to the semi-finals with a 3-1 win at Allianz Stadium, after extra time.

Sky Blues centre half Nikola Petkovic was sent off by referee Ben Williams with three minutes to go after he and Reds striker Fabio Ferreira collided when challenging for the same ball.  The sending off incensed the Sky Blues players and staff who felt minimal contact had been made.

With the game evenly poised at 1-1 the red card gave Adelaide the advantage heading into extra time where two goals from Bruce Djite sealed their win.

Earlier Sergio Cirio had given the Reds a first half lead before Sydney FC skipper Alex Brosque equalised in a dominant second half performance from the Sky Blues. 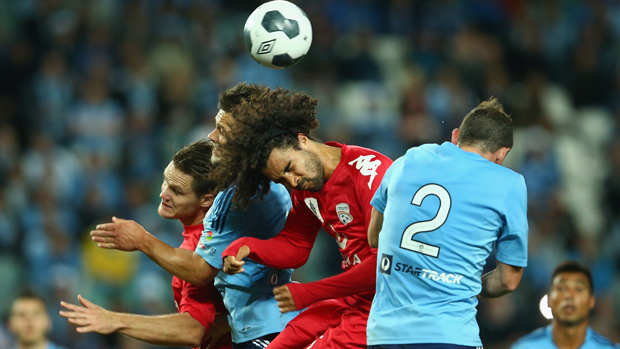 “I wasn’t thrilled with our first half but second half up, until the red card, there was only going to be one winner.

“They were at full strength, we had a lot of players out and we didn’t have too many problems.  It’s disappointing not to go further in the FFA Cup because of certain circumstances that can’t be helped, but we’ll be confident when we play them next time.  It wouldn’t have got to extra time, we would have beaten them in 90 minutes.”

24’ CIRIO GOAL – Carrusca plays ball over the top to Cirio on the left hand side.  The striker controls the ball cuts inside and finds himself one on one with the goalkeeper Necevski whom he beats but lifting the ball over the diving keeper’s legs.

50’ BROSQUE GOAL – Naumoff squares the ball to Dimitrijevic who finds Carle in the left hand channel of the box.  He cuts it back to Brosque who delicately lifts it over the keeper and into the net.

98’ DJITE GOAL – Carrusca receives the ball wide on the right and crosses to find Djite on the penalty spot to fire home first time.

110’ DJITE GOAL – A ball from the Adelaide left was mis-hit back across the box by Carrusca where Djite was waiting three yards out to flick the ball up, turn and fire into the roof of the net.

41’ DJITE SHOT – Necevski gets down well to his right to save a right footed shot from Djite from 20 yards.

43’ ELRICH LAST DITCH TACKLE – A wonderful through ball from Triantis finds Janko.  The big Austrian striker takes a touch and prepares to shoot with only the keeper to beat but Elrich sticks out a left boot and pushes the ball behind for a corner.

52’ BROSQUE SHOT – Abbas gets to the byline and cuts the ball back to Brosque who hits it first time into the hands of Galekovic in the Adelaide goal.

58’ GLIGOR HEADER – Good work from Sydney FC and Abbas gets down the flank to cross.  The centre finds Gligor 12 yards out but he can only put his header wide.

80’ BOJIC SHOT – Brosque wins the ball and plays in the overlapping Bojic who hits it first time and Galekovic palms it over the bar.

87’ PETKOVIC SENT OFF – Petkovic sent off after both he and Ferreira challenged with high feet for the ball.  The Serbian given his marching orders by Ben Williams which incenses the Sydney FC players and coaching staff who believe it a very soft decision.

91’ NECEVSKI SAVES – Ferreira gets free down the right hand side and has a shot on goal which Necevski gets down well to save.

112’ ANTONIS SHOT – Antonis picks the ball up on the right of the penalty box and clipped a left foot curling shot to the far post which Galekovic pushes around the post.

With a tight turnaround from the Sydney Derby and a match against Brisbane Roar on Friday making it three games in six days, Sydney FC Head Coach Graham Arnold rotated his squad bringing Ivan Necevski between the sticks with Vedran Janjetovic rested on the bench.  Seb Ryall moved to centre back at the expense of the suspended Sasa Ognenovski with Pedj Bojic coming in at right back.  Peter Triantis was brought in for Terry Antonis in midfield, with the Socceroo sitting on the bench while Christopher Naumoff, Nick Carle and Ali Abbas were all given starts having been unused substitutes on Saturday.  Skipper Alex Brosque and goalscorer Corey Gameiro both took a seat on the bench with youngster Aaron Calver.  Matthew Jurman was due to play but pulled up in the warm up and 17th man Hagi Gligor replaced him on the start list.