Chasing his third piece of silverware in his career, the towering Dutch centre half said he’s proud to represent the Sky Blues and believes the whole squad will rise to the occasion on Sunday in the Grand Final.

“It makes me proud when I wear the shirt,” Buijs said.

“Every game I play, I’ve played 11 games here, it makes me proud to play in this shirt and in this stadium. We have the crowd with us for this game and it’s very exciting.

“The Finals are different for sure. This is my second trophy and I hope the third is coming too and it should be nice.

“The Finals is different than Holland or somewhere else but it makes it also a pleasure, for the club and the players and everybody.

“Big games I think for players mean a lot,” he continued.

“There’s a lot of pressure, good teams, more crowd and the atmosphere goes up. These kinds of things make these games very nice to play in.

“We have a great team and if we show this on Sunday we can make some good things on the pitch.” 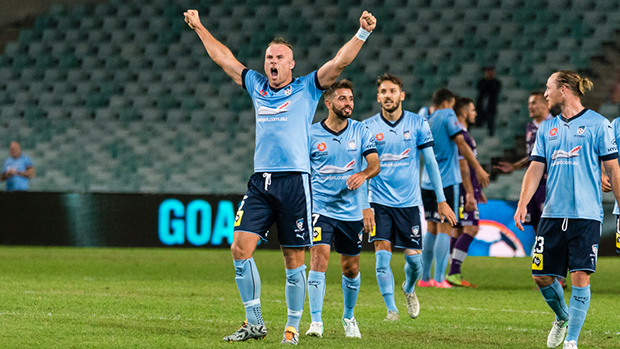 Playing a large part in guiding the Sky Blues to the Grand Final, scoring the second goal in Saturday’s semi-final, Buijs said he was pleased to hit the back of the net as he reflected on his time at the club so far.

“I think it was an important goal for the club, because it was the second of the game and mentally it broke them,” Buijs said of his strike.

“Personally I was also happy with the goal because players want to score, I like to score, not only for strikers but also for me.

“The time here is lovely,” he continued.

“We have a great squad, great players with great personalities, we fight for each other in the games and this is what I like a lot here.”