And so it comes down to the final 90 minutes of the season, with self-styled underdogs Sydney FC taking on the Melbourne City juggernaut but the AAMI Park contest is more evenly balanced than it might first seem.

The very fact that these two sides are lining up together for the championship decider was unthinkable back in October. The opening day of the season saw Melbourne City begin life in the Westfield W-League by inflicting a barely believable record 6-0 defeat of Sydney FC.

City went on to win all 12 regular season matches in a stunning run only to stumble in last weekend’s semi-final, needing penalties to overcome Brisbane Roar.

Earning redemption for that opening day embarrassment has been a long journey for the Sky Blues but, inch by inch, they have improved.

Certainly there is no doubting the experience and quality of the Sky Blues personnel. And, just a fortnight ago, they gave City a fright on their last trip to Melbourne before slipping to a 2-1 loss, thanks only to a late deflected winner.

“I’d say we’re the underdogs,” said Sydney FC skipper Teresa Polias. “More of the pressure is on them. Anything can happen and we’ll go in with full confidence.”

Last weekend Sydney collected a smash-and-grab 1-0 win at Canberra United to win through to the decider, but Sky Blues coach Daniel Barrett says his side would be adopting an attacking mindset.

“I give them credit and praise for everything they’ve achieved this year but this weekend, it’s a clean slate.”

There was an eleventh hour squad change for Sydney FC who trained on Saturday morning amid familiar surroundings, before travelling south. Fullback Ellyse Perry will remain with the Southern Stars to represent Australia in cricket’s Twenty20 series against India, opening up a berth for teenager Hannah Bacon who was away recently with the Australian Schoolgirls side.

For City, much of the pre-match media focus was on the fitness of inspirational midfielder Jess Fishlock.

Coach Joe Montemurro says the Wales skipper will given be until kick-off to prove her fitness. “She’s slowly rehabbing and we’re going to leave it right to the end to make a decision.”

There are other starting XI selections for Montemurro to muse. Australia captain Lisa De Vanna was a surprise omission last weekend, only to come on at the half-hour mark in place of Fishlock.

If last weekend’s bona-fide Westfield W-League semi-final classic at the same AAMI Park venue between City and Brisbane Roar is any gauge, then this Sunday’s season decider should provide drama and entertainment in equal measure. Certainly that is the view of Montemurro.

“We had a pre-cursor last Monday,” he said. “It was a special event and I think it will probably be even better tomorrow.” 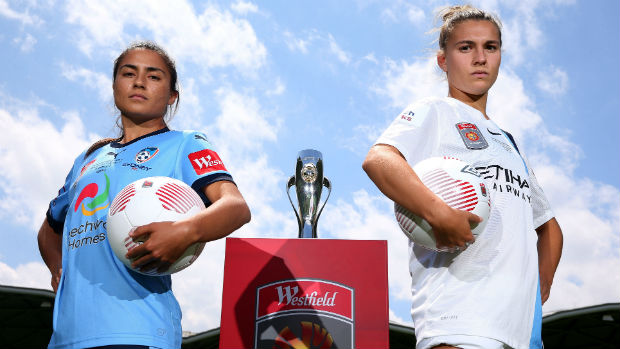