A bright and warm afternoon saw the Sky Blues’ squad mingle with a small number of Members in an exclusive Premier Members event at Sydney FC’s training ground at Macquarie University on Saturday.

Fans were treated to a BBQ where the small group was able to interact with the squad ahead of having their team photo taken and watching a training session at the club’s facilities.

Foundation members Ian and Sylvia Coates were in attendance on the day and enjoyed seeing the apparent closeness of the playing group.

“We’re both very close to the club and it was a great experience being able to chat with the players,” he said.

“The comradery between the players is great to see and I could see us doing the domestic treble this year.” 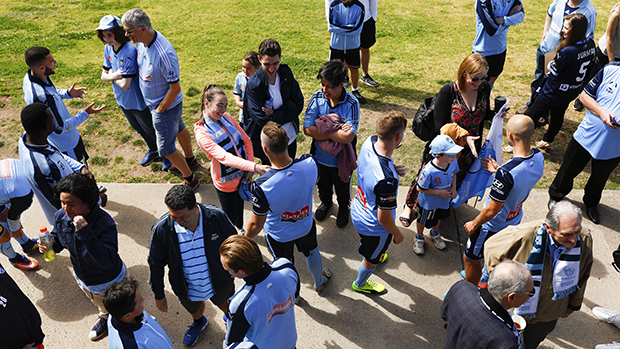 Samara Crook and said her son Jarrah was ‘beside himself with excitement’ at the chance to meet his favorite player, Aaron Calver.

“The players were so generous with their time,” she said.

“Aaron took Jarrah around to meet all the other players and it was a fantastic experience to have 1-on-1 time with them.”

Both first time Members, the opportunity for her son to be in the team photo and a match day player mascot stood out among the number of benefits that come with a Sydney FC Premier Membership.

“The corporate box, the number of exclusive members days are great but he was so excited to be standing next to his heroes in their squad photo,” Samara continued.

“He was lucky enough to walk out alongside O’Neill for the Arsenal game and it’s something he’ll never forget.”

It wasn’t just the fans enjoying the day out, with defender Aaron Calver mentioning how important it is to have the fans support.

“You know they’re backing us all the way and always there for us. It’s great to get the chance to talk with the fans individually as well.”